Originally posted way back in 2006. 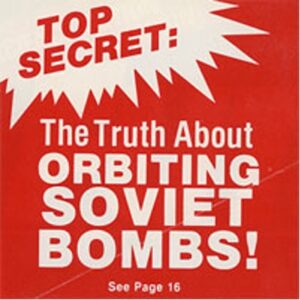 A while back, I was going through an old footlocker full of various magazines I have collected over the years. I had quite a bit of stuff in there, including a lot of sci-fi & horror magazines, many issues of Mad, Cracked and Crazy, music-related magazines, and the like. Included in the mix were about three issues of an old magazine called Future: The Magazine of Science Adventure. All of the issues were from the late 1970s and I figure I must have bought these magazines a Half Price Books or some other secondhand shop many years ago. As I inspected the issues for the first time in several years, the one issue that especially caught my eye was the May 1978 issue that had a small white and red wraparound ad that screamed: TOP SECRET: The Truth About ORBITING SOVIET BOMBS! See page 16.” It certainly looked like good reading, so I set the magazine aside and once I had thumbed through and organized the other magazines, I had a look at the “Top Secret” report.

The article was a very short story entitled “Cosmos-954: A Glimpse of Space Disaster” which chronicled the January 24, 1978 crash of a nuclear-powered Soviet satellite in Northwest Territories, Canada.  The article is a classic mixture of science fiction and Cold War hype:

The newspaper headlines were straight out of a fifties science-fiction film: KILLER SATELLITE CRASHES IN CANADA! Only this time the story was real. The crash-landing of the Soviet nuclear-powered satellite, Cosmos-954, north of the American border was a nightmare come true. The effects of the event were felt immediately. Politicians started talking in scientific jargon while many scientists issued distinctly political statements. An interest in space law was (belatedly) revitalized. People began looking to the heavens with increased anxiety. The spectre of a Russian- spawned war in space hovered over the globe. “Perhaps Chicken Little was right,” some joked in reference to the unexpected appearance of the stray spacecraft. But Cosmos-954’s appearance was no joke.

The killer satellite seems best suited for a sneak attack on U.S. command and control, and early-warning satellites in 24-hour orbits. The FOBS (Fractional Orbital Bombardment System) orbital H-bombs seem to be a useful way to approach the U.S. in low orbits, eluding radar detection until the last minute. The nuclear-power naval watchers would mainly be useful in plotting at- tacks on aircraft carriers and nuclear missile subs prior to the start of a war from space. 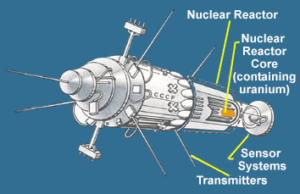 The real story of Cosmos-954 — the post-Cold War version, anyway, — is much less fantastic.  It is now known that Cosmos-954 was a Soviet Radar Ocean Reconnaissance Satellite (RORSAT) that was powered by a nuclear reactor. The former website UFO Phenomenon in the North previously offered a bit more information on the ultimate demise of the mission:

Previous Soviet missions using such technology would split the reactor from the parent body of the spacecraft and boost the radioactive material into a higher orbit where the reactor would remain for 300-1000 years once the short lifetime of the satellite was over (which was well beyond the life of the radioactive material). Cosmos 954 had a special problem, however – it went out of control and the technicians were unable to separate the reactor from the spacecraft’s parent body.

The Future article implicitly condemns the USSR for failing to notify anyone prior to the crash of Cosmos-954, but more recent accounts of the tale offer information that the USSR did send out a warning regarding the impending calamity, thus allowing NORAD to track the satellite until the crash. Moreover, some accounts note that the orbit of Cosmos-954 had become unstable as far back as September 18, 1977 and that its movements were monitored on a regular basis up until its demise.  A report from CBC Radio (dated Jan. 28, 1978 ) indicates that U.S. President Jimmy Carter contacted the Canadian Prime Minister by phone to advise him of the issue shortly before the satellite’s crash.  According to the CBC, in the wake of the crash, Canadian officials expressed disdain over the American delay in sharing information regarding the impending crash of Cosmos-954.

When Cosmos-954 finally did crash, it fell in the Great Slave Lake area of the Northwest Territories in Canada (near Yellowknife), spreading radioactive material across an area as large as 124,000 km² (some sources suggest the area was around 80,000 km²).  The total amount of radioactive material that reached the ground was around 25% of the estimated 68 pounds of Uranium-235 that was originally aboard Cosmos-954.  The remaining 75% of the U-235 burned up during re-entry.  No human deaths were reported as a result of the crash and it seems that information regarding the long-term environmental effects of contamination is rather few and far between.

Interestingly enough, the USSR eventually agreed to pay Canada a total of $15 million (US) for cleanup efforts, but they ultimately paid somewhere around half of the total bill.  By March 1978, most debris from the satellite had been collected through joint U.S.-Canadian recovery efforts.

In terms of nuclear accidents, Cosmos-954 was certainly an intriguing story back in 1978.  But in the grand scheme of things, it’s a drop in the bucket compared to some of the other nuclear accidents which have come to light in the past few decades.  For some particularly harrowing fare, check out Atomic Archive’s list of nuclear weapons incidents since 1950.

This entry was posted in USSR and tagged Canada, Cosmos-954, nuclear accidents, USSR. Bookmark the permalink.