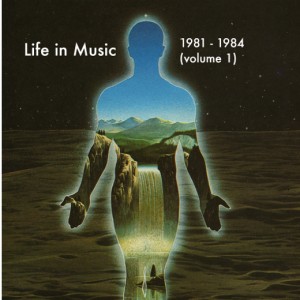 Within the short space of three years, I went from listening to Sesame Street and Snoopy records to Top 40 Rock and the burgeoning Heavy Metal sounds of the early 1980s.  Here’s the first disc of “My Life In Music: 1981 – 1984,” covering my final years in Eastern Kentucky and most of my entire stay in Central Kentucky.

The cover art for this disc is drawn from Encyclopedia of Science Fiction from Octopus Books (1978).  My brother had this book when I was a kid and I was always fascinated by it.  I think he got it as a Christmas gift in 1982 and I seem to recall that my mom wished aloud that she had given it a closer look before buying it.  This probably has something to do with all of the depictions of topless women throughout the volume.  When my brother’s interest in science fiction waned some years later, he gave the book to me but during a weak moment in my early teenage years, I traded it in for some horror novels.  After a couple of decades, I got a copy through eBay, specifically for use on this project. 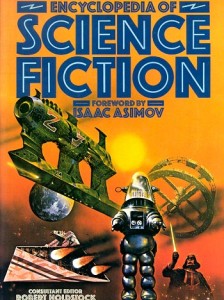 1.  “Nightmare” from Dimension X  (original air date June 10, 1951)
I think it was for Christmas in 1981 or 1982 that my brother received some “Old Time Radio” cassette tapes featuring episodes of The Lone Ranger, Tarzan and Dimension X.  “Nightmare” was the title of the Dimension X episode and although it was incredibly spooky, I always thought it was really cool.  In the story, a disgruntled and unstable office worker communicates with machines, convincing them to launch a war against mankind. 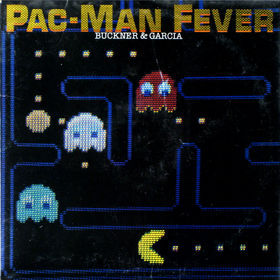 4.  “Do the Donkey Kong” by Buckner and Garcia (original release 1982)
Although “Pac Man Fever” was their big hit, I always felt like “Do The Donkey Kong” was something of an underrated musical accomplishment.  One day, either out of a burst of creativity or perhaps just sheer boredom, I created a musical “play” of sorts that was staged entirely in my bedroom and used the entire Pac Man Fever LP as the production’s soundtrack.  I think it had to do with an alien invasion or something like that.

5. “The Cemetery” from Night Gallery (episode aired 1970)
6.  “I Should’ve Called” by Eddy Raven (original release 1981)
On what was probably the only sleepover of my pre-teen years (or my teen years, for that matter), I spent the night at our next-door neighbors’ house.  They were the first people I had ever known to get cable television and my friend and I stayed up kind of late, watching part of Rod Serling’s Night Gallery pilot episode.  “The Cemetary” was an especially scary installment of the show and Roddy McDowall’s over-the-top performance scared the royal piss out of me.  (These days, whenever Thomai and I watch this show, we feel compelled to put on our best impression of McDowall yelling at his butler:  “PortifOOOY!  PortifOOOY!”)

Later the same night, I couldn’t get to sleep and I wanted to go home.  When I became upset, my friend handed me a small AM radio and I tuned it to some random station to hear the lyrics “I thought of you, I should’ve Called.”  I cried myself to sleep that night.

7.  “Renegade” by Styx (original release 1979)
My sister got a K-Tel album with this song on it and my siblings and I always thought the singer yells “DAAAAAMN!” right before the heavy part of the song kicks in.  We used to listen to it again and again and laugh ourselves silly.  In retrospect, I’m not really sure if the guy actually says “damn” after all.

8. “Lawyers in Love” by Jackson Browne (original release 1983)
I really enjoyed listening to Casey Kasem’s “American Top 40” radio program on Sunday mornings and the first time I heard “Lawyers in Love” was on that show.  It’s a classic Cold War song and it has a kind of driving, desperate tone that really captures the Reagan era well.

9.  “Deep in the Dark” by Laura Brannigan (original release 1983)
I saw Laura Brannigan perform this cover of “Der Komissar” on American bandstand or some similar show but it was so completely bizarre that for many years I thought I had simply dreamed the whole thing.  File this under “So bad, it’s good.” 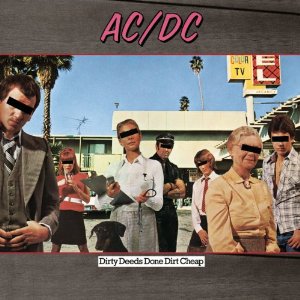 10.  “One Tin Soldier (The Ballad of Billy Jack)” by Coven (original release 1971)
11. “Big Balls” by AC/DC (original release 1976)
“Mrs. H.”, my Music teacher from fourth to sixth grade was an elderly woman with bright red (dyed) hair who seemed to have a pretty narrow perspective on the world.  That’s not to say that she wasn’t really a nice person – after all, I didn’t really know her personally – but she was generally pretty awkward and didn’t seem to have a decent grasp of what was going on in the class.  Consequently, a lot of kids took great joy in giving her a hard time.

At the beginning of a typical class, Mrs. H.would pass out these blue folders full of mimeographed song lyrics.  There were standards, such as the original, uncensored version “My Old Kentucky Home,” The University of Kentucky’s “Fight Song,” “The Caisson Song,” and similar fare.  Also included in the folder were the lyrics to “One Tin Soldier,” which was a favorite of most of the boys in the class.  On the days that each student could pick his/her favorite song to sing, one could count on singing “One Tin Soldier” about five times in one hour because the guys thought it was such a badass song.  In retrospect, I am pretty sure we all thought it was a pro-war song with all its gory ending.  Too bad that Mrs. H. was content to let us all miss the entire point of the song for so long.

When we started a “music appreciation” series in the same class, students were encouraged to bring in cassettes or records of favorite songs to play for the class.  One of the kids brought in Dirty Deeds Done Dirt Cheap by AC/DC and cued up “Big Balls” for what was a truly memorable grade school moment.  Most of the kids in the class were howling halfway through the first verse and by the time we got to the chorus, the teacher had finally gotten the gist of the double entendre and hurriedly put a stop to it.  It was one of the funniest spectacles I have witnessed in my entire life.

12. “Girls With Guns” by Tommy Shaw (original release 1984)
My brother loved this single so much, he bought the album and we spent a lot of time listening to it while we played pool and ping pong.  The album’s cuts “Lonely School” and “Come In and Explain” were great, too.

13.  “When Doves Cry” by Prince (original release 1984)
14.  “Go Insane” by Lindsey Buckingham (original release 1984)
15.  “If This Is It” by Huey Lewis (single released 1984 )
Since we didn’t have MTV when I was a kid, the only chance I had to see music videos was Friday Night Videos, which aired at 12:30 AM on Friday nights (Saturday mornings, really).  I only managed to catch the show a handful of times but I was pretty impressionable back then and some of the videos really made an impression on me.  My brother was really taken with Prince back then and I was pretty fond of his music as well.  I remember watching the video for “When Doves Cry” on Friday night.  My dad was sitting up with me and I commented that the video – a collection of clips from Prince’s film Purple Rain – told a story of sorts.  My dad replied, “Yeah, but I am not sure just what kind of story it’s telling.”  Kind of a funny “dad” moment.

I also enjoyed Lindsey Buckingham’s video for “Go Insane” and was happy to see the whimsical video for “If This Is it” because I have always been a secret fan of Huey Lewis and the News.  There…Now everybody knows it.

16. “Synchronicity II” by The Police (original release 1983)
I appreciated the creepy imagery about the sea creature in “Synchronicity II” but listening to the song all these years later, I have to admit that I didn’t fully appreciate what this song is all about.  By the time this single hit the radio, I was really into music.  As I started to get into “edgier” stuff like Quiet Riot and the like, I wanted to purchase some music-related “buttons” (badges) to show off my interests.  One day we visited Record bar at the Turfland Mall and I got to pick my first button from the velvet covered spin rack at the cash register.  My folks were happy that I was content getting a Police button instead of something with demons and pentagrams.  That stuff would come soon enough, though.

19.  “Rock of Ages” by Def Leppard (original release 1983)
The same year I got Metal Health, my brother got Def Leppard’s Pyromania.  The first time he cranked it up on the Radio Shack stereo, my folks commented that it sounded like we were under attack from wild Indians.  One time I asked my brother what the words “Gunter glieben glauchen globen” mean (from the beginning of the song) and he said they meant “I’m the king of rock and roll.”  I don’t think he knew what he was talking about. 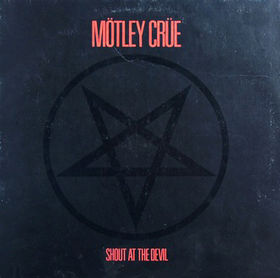 20.  “Shout at the Devil” by Mötley Crüe (original release 1983)
As my interest in metal grew, I managed to convince my folks to buy me an issue of Circus Magazine every so often.  I had never heard a song by Mötley Crüe because the local radio stations didn’t play Crüe stuff very often and we didn’t have MTV, but I was really interested in reading the articles about them in Circus.  Late one night, I was lucky enough to catch the song “Shout at the Devil” on WKQQ and I managed to record most of it on my mono boom box.  I loved the song, but I didn’t get around to buying the album itself until I was 25 years old.