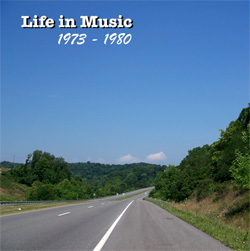 The “cover art” for this installment features a snapshot from our 2007 visit to Kentucky and West Virginia.  It’s the view from I-64 on the way into Huntington.

1.  The Death of Elvis Presley, as reported by David Brinkley  (August 16, 1977)
The news of Elvis Presley’s death is not only one of my earliest memories regarding music; it’s one of the first things I remember at all.  The news broke on August 16, 1977 and I was four years old at the time.  I distinctly recall watching television with my brother and sister when a news bulletin interrupted our show.  I had no idea who Elvis was and I went out to the kitchen where my folks were sitting and asked them.  For weeks, I’d mimic the news bulletin, saying something like, “We interrupt this program to bring you this high-buckled news report.  Elvis Presley is dead.  We don’t know why, but he’s dead, dead, dead!”  It’s still kind of funny to me.

2.  “Gotta Get to Your House” by David Seville (Original release: 1957)
We had an old set of 45’s that we’d listen to over and over again and this one by Alvin and the Chipmunks creator David Seville was a favorite.  I remember listening to this with them one day and they had to explain to me why it was so funny.  For the mix CD, I recorded this from our original 45.  These days, our girls are fans of the Chipmunks and they think this song is hilarious. 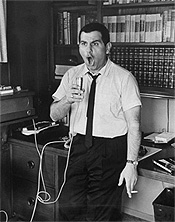 4.  “Annie’s Song” by John Denver (Original release:  1974)
My sister had this song on a 45.  I was convinced that this song was actually about her and I was kind of disappointed when my parents told me that it was just a coincidence that my sister had the same name as John Denver’s wife, Annie.

5.  “Superstition” by Stevie Wonder (Original release:  1972)
I wasn’t even born when Stevie Wonder performed “Superstition” on Sesame Street, but the episode was still played regularly when I was 5 or 6 years old.  PBS had some great stuff back then, including The Electric Company, Zoom and — of course — Mister Rogers’ Neighborhood.

6.  “The Gambler” by Kenny Rogers (Original release:  1978)
“The Gambler” was absolutely huge when I was a kid.  My folks bought Kenny Rogers: Greatest Hits for me on LP and I used to listen to the whole album, start to finish.  One time, I asked my mom to explain the lyric, “The best that you can hope for is to die in your sleep” and told me it meant that no suffering is involved.  The Gambler gets this kind of merciful ending when he “breaks even” towards the end of the song.  It seems like morbid fare for a six year-old kid, but it beats the hell out of the crap that Disney is feeding to kids nowadays.  My other favorites from that LP were “Coward of the County” (in which the main character’s girlfriend is apparently raped by three brothers) and “The Long Arm of the Law” (where the protagonist knocks up his girlfriend and then has to hide from her father who is a crooked-ass judge).  It wasn’t until many years later that I fully understood the adult themes of these songs.

7.  “The Long and Winding Road” by The Beatles  (Original release: 1970)
Someone recorded this on a tape that we had laying around the house and the cassette ended up in the room that my brother and I shared.  We recorded all kinds of other shenanigans on the tape, and whenever I’d go back and listen to our crazy escapades, I’d listen to this song as well.  I had no idea it was The Beatles until I was a good deal older.  Also on the tape was the original version of Elmo & Patsy’s “Grandma Got Run Over By a Reindeer,” which was far better than the re-make they did some years later.

8.  “He is Your Brother”  by ABBA (Original release:  1972)
9.  “California Dreamin'”  by The Seekers (Original release: 1966)
My dad had Greatest Hits of Abba (volumes 1 and 2) on LP as well as a couple albums by The Seekers, Georgy Girl and Live at the Talk of the Town.  The cover of ABBA: Greatest Hits featured a funny scene that I didn’t quite understand when I was little.  I still love the Seekers and I prefer their version of “California Dreamin'” to the original.

10.  “MacArthur Park” by Maynard Ferguson (Original release: 1969)
When my brother started playing the trumpet, someone recommended he listen to stuff by Maynard Ferguson and Chuck Mangione to get an idea of how the better contemporary players sounded.  My folks got him the Mangione album Fun and Games and a few LPs by Ferguson, including the 1980 compilation, The Best of Maynard Ferguson.  The Mangione album was nice, but Ferguson had some really unusual material, including interpretations of themes from Rocky, Battlestar Galactica and Star Trek.  Ferguson’s cover of “MacArthur Park” is a tremendous jam that runs almost ten minutes.  This album was in heavy rotation at our house in Russell.

11.  “Pilot of the Airwaves” by Charlie Dore (Original release: 1980)
12.  “Any Way You Want It”  by Journey (Original release: 1980)
I got the K-Tel album Power Play for Christmas 1980 and was the first Rock LP I ever owned.  Both “Pilot of the Airwaves” and “Any Way You Want it” were on there, but I originally wanted this record because it had “Call me” by Blondie on it (…and yeah, that song was totally about prostitution, too).  In third grade, I had a teacher who was really fixated on backwards masking and one afternoon, I got the album out and tried to play it backwards.  For a while, I was convinced that “Pilot of the Airwaves” contained backwards messages but it never made sense to me why any musician would choose such a bizarre, nonsensical method to communicate with listeners.

13.  “You’re Never Goin’ to Tampa With Me” by Ray Stevens (Original release: 1980)
My brother and sister had the 45 of “Shriner’s Convention” by Ray Stevens and as I recall, my whole family thought the song was hilarious but I get most of the jokes.  One day while I was alone, I turned the record over and listened to the long-overlooked B-side, “You’re Never Goin’ to Tampa With Me.”  I can’t say that this song made much sense to me at the time, either, but I actually became really fond of it.  It is an incredibly weird song.  Recorded form our old 45.

14.  “Flash’s Theme” by Queen (Original release: 1980)
My dad took me to see Flash Gordon in 1980 and I thought it was the best movie ever.  After we got home that night, I grabbed a big stack of paper and crayons so I could document everything I had seen.  Shortly thereafter, I got “Flash’s Theme” (b/w “Football Fight”) on 45 and played it all the time.  I was in second grade at the time and I tried to write out the lyrics one day while I was at school.  In hindsight, I must admit that my interpretations were waaay off.

15.  “It’s Still Rock and Roll to Me” by Billy Joel  (Original release: 1980)
I have the strangest recollection of watching this video with my entire family while we lived in Russell.  Music videos were pretty new back then and we didn’t have cable, so it must’ve been a night that Solid Gold was on TV.  When he got to the lyric, “Don’t waste your money on a new set of speakers/You get more mileage from a cheap pair of sneakers,” my mom felt the need to point that specific lyric out to my brother and she asked if he understood it.  To this day, every time I hear this song, that particular memory comes to mind.

16.  “Like the Wind” by Christopher Cross (Original release: 1980)
I don’t love this song at all.  Still, I have good memories of riding bikes in the garage with my sister while this was on the radio.  Michael McDonald took a break from ruining the Doobie Brothers to sing back-up vocals on this song.

17.  “(Just Like) Starting Over” by John Lennon (Original release: 1980)
Like the death of Elvis Presley, John Lennon’s murder was big news and I remember that event well.  This song was released several weeks before his passing and it received a lot of airplay soon thereafter.  Years later, this would become a “sing along song” for T. and me when we were dating. 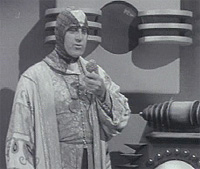 Retik, Ruler of the Moon

18.  “Mork’s Mixed Emotions” from Mork & Mindy (Original release: 1979)
Setting her tape recorder up next to our television, my mom recorded the audio from this episode of Mork & Mindy.  Before we had a VCR or Nick at Night to watch old TV shows, I’d just play this tape again and again for entertainment on long, boring afternoons.  The great thing about that particular recording is that it captured us all laughing at the jokes in the show.  Unfortunately, I lost the tape a long time ago.   These excerpts are from the DVD of the show’s first season.

19.  “A Very Strange Medley (V.S.M.)” by Barry Manilow (Original release: 1977)
Much like the old ABBA and Seekers records, Barry Manilow Live was an early favorite.  I especially loved Manilow’s medley of old commercials but I also enjoyed his “Jump Shout Boogie Medley.”  Even after I discovered metal and punk, this record remained a guilty pleasure of mine.  No sense in hiding my appreciation for Manilow any more though;  talent is talent and a good song is a good song.

20.  “They’re Coming to Take Me Away, Ha-Haaa!”  by Napoleon XIV (Original release: 1966)
At some point, one of the local radio stations started playing this song on their morning show.  I used to picture the singer as Retik, Ruler of the Moon (one of the bad guys from the old Commando Cody series, Radar Men from the Moon).