In the early Eighties, I discovered some of the most intriguing and exciting and influences I had ever encountered to that point.  I was a little familiar with the general concept of professional wrestling when we lived in eastern Kentucky, but upon moving to Lexington in 1983, we found ourselves smack in the middle of a hotbed of some of the scrappiest rasslin’ promotions in the country.  My older brother and I watched the Memphis/CWA and ICW shows  each weekend and we were fortunate enough to attend a few live events (in both eastern and central Kentucky).  When we weren’t watching wrestling, we were talking about it and reenacting it in the living room.  The regional promotions sustained our interest until we left the area in late 1984.

Of course, this was the era of MTV’s birth and, although I was excited about the idea of a television channel that only shows music videos (still a good concept, by the way…so what the hell happened to MTV, then?), we didn’t have cable, so I got my share of pop music from the radio and network television.

January 1, 1984 was a really interesting day for me.  I remember it because there had been so much discussion of George Orwell’s book 1984 in the months leading up to the New Year.  For me, the hype surrounding the date culminated in an odd spectacle I saw on public television on New Year’s Day.  The show was called Good Morning Mr. Orwell and it was really more of a piece of performance art, assembled and staged by Korean artist Nam June Paik.  The program featured live and recorded performances by Allen Ginsberg, Laurie Anderson and many others and for years, images from this show left an indelible imprint on my mind.  I tried to get a copy of the show back in 1998 or so but at the time Nam’s studio was charging a spectacular amount of money for it (by my standards, anyway).  I was told by a lady who answered phones there that I should think of it like I am buying a piece of artwork, like a painting or something.  Thank goodness YouTube came along.  Now I can watch videos and look at paintings for free.  What a novel concept. For much more information on Nam June Paik, visit Artsy’s Nam June Paik page.

Sometime in the late spring or summer of ’84, I stumbled upon something that would really change my ideas about music, performance art and a lot of other things…mostly for the better.  One afternoon, I was listening to audio cassette tapes that my mom had made of old TV shows back in the late 70’s/early ‘80’s.  She did this by putting a Radio Shack tape recorder next to the speaker of out Zenith console television.  This was state of the art stuff back then.  One of the shows she’d taped was  a network television special about the history of recorded sound and it featured acts by a very eclectic bunch or performers, including The Mills Brothers, Johnny and June Carter Cash, Sha Na Na, Don McLean and lots more.  At the very end of the tape was the shows final performance, an audio collage of clips from the Kiss album Alive II.  Up to the moment  I discovered this tape, I had never given the music of kiss a second thought but the day I listened to this medley, I was hooked…forever.

I lost the audio tape itself some time after discovering it, but I listened to it so much, I could remember almost everything about it (the name of the show was never mentioned in the clips that we had recorded, though).  After literally decades of searching for some kind of clue as to the name of the show as well as a copy of it on VHS or something, I found out that the name of the show was called 100 Years of Golden Hits and it originally aired in 1978.  When I finally obtained a copy of the show in 2010, it was an absolutely tremendous feeling to get to see and hear those old performances again after so many years.

Cover art for this mix CD comes from the inside back cover of John Carter, Warlord of Mars #21 (February 1979).  By some odd coincidence, the same time I discovered the Kiss medley, I also found this ad promoting the Kiss solo albums as “a milestone” in recording history.  By the time I discovered the above-mentioned audiotape and the solos ad, Kiss had already moved on and dropped a few members as well as their makeup.  But even though I was a little late in coming around to Kiss, I came to appreciate their entire body of work (up to the Tommy Thayer years, anyway).  For many years to come, I’d spend a lot of time and money in pursuit of Kiss LPs and tapes. 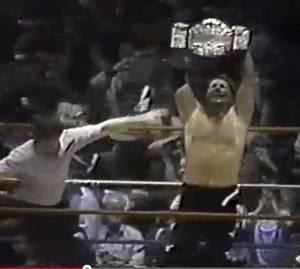 Wrestling Songs
1.  “Jerry Lawler Wins the AWA Title” from Championship Wrestling (1982)  video
2.  “Winning” by Santana (original release 1981)    video
3.  “Eye of the Tiger” by Survivor (original release 1982)
4.  “Everybody Wants You” by Billy Squier (original release 1982)  video
5.  “Keep Me Satisfied” by Billy Squier (original release 1982)
6.  “You Dropped a Bomb on Me” by The Gap Band (original release 1982)   video
7.  “Some Days Are Diamonds” by John Denver (original release 1981)
The local territories were great at producing video montages that captured the best moments of their top stars.  Music videos were on the rise and wrestling followed the trend, setting highlight reels to pop songs.  When Jerry Lawler won the AWA title from Nick Bockwinkel in 1982, The folks at Championship wrestling set clips from their best feuds to Santana’s “I’m Winning.”  Incidentally, Lawler’s controversial “win” over Bockwinkel was one of my favorite moments as a young wrestling fan and Nick’s post-match promo is one of my all-time favorite moments in the history of the sport. Leaping Lanny Poffo took on Hustler Rip Rogers in ICW’s “hair versus hair” cage match main event at Rupp Arena.  That bout was billed as an “Eye of the Tiger” match after Survivor hit song (which was also used in one of the Rocky films).  When the Fabulous Ones debuted, their first on-camera appearance was a video montage set to “Everybody Wants You” by Billy Squier.  Championship Wrestling later created other music videos of the Fabs, set to “Keep Me Satisfied” (the B-side of “Everybody Wants You”) and “You Dropped a Bomb on Me” by The Gap Band.  They also celebrated Terry Taylor’s first run as Mid-America Heavyweight Champion with a montage featuring John Denver’s “Some Days Are Diamonds.”  All great stuff.  All great memories.

8.  “Mr.  Roboto” by Styx (original release 1983)
One of my absolute favorites.  When it was on the charts, I used to tune into Casey Kasem’s American Top 40 on Sundays just to catch this son and I remember one particular episode of the countdown in which Kasem introduced the song by telling the story of James Kilroy.  Kilroy was a co-creator of the WWII-era graffiti that featured the phrase “Kilroy was here.”  I was absolutely crazy about this song until I saw a sticker on one of the LPs that said something like the album contained secret backwards messages.  It was a publicity stunt of sorts based on a lot of hysteria about hidden Satanism in rock music but my third grade teacher had talked so much about this that I was sufficiently spooked for some time.

9.  “It’s a Mistake” by Men at Work (original release 1983)
Most folks remember Men At Work for “Down Under” but this song was always my personal favorite out of all of their efforts.  I suppose I liked it best because it was about war and I was really into GI Joe at the time.  I happened to catch the video for this song one Saturday afternoon using our giant television antenna to pull in a signal from some faraway channel. 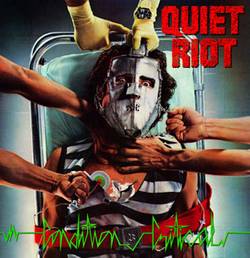 I was unbelievably excited about Quiet Riot’s follow up to Metal Health.  Condition Critical turned out to be the very first album that I ever bought on the actual day of its release.  My dad took me to Record Bar and the Turfland Mall in Lexington to get it.  “Mama Weer All Crazee Now” was the first single off Condition Critical and I heard it on Lexington’s WKQQ about a week before the album was released.

Good Morning Mr. Orwell by Nam June Paik (1984)
11.  “Excellent Birds” by Laurie Anderson and Peter Gabriel     video
12.  “Wake Up (It’s 1984) by Oingo Boingo    video
13.  “Do the Meditation Rock” by Allen Ginsberg    video
As mentioned above, this one-time television special was a video collage of performance art.  This show stimulated my interest and enthusiasm for unusual and futuristic artwork.  This was also my fits exposure to the work of Allen Ginsberg and I would rediscover him some years later as a young adult. 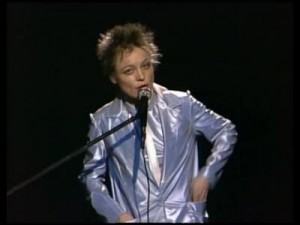 14.  “Sharkey’s Day” by Laurie Anderson (original release 1984)   video
15.  “Mach 20” by Laurie Anderson (performed on The New Show, 1984)    video
Laurie Anderson seemed to be everywhere in the early ‘80s.  I think that her performances on Good Morning Mr.  Orwell were my first experiences with her work but she appeared as a musical guest on some primetime shows the same year.  I remember seeing videos for both “Sharkey’s Day” and “Mach 20” on the short-lived program The New Show but I didn’t know the name of  “Mach 20” until I found the video for it on YouTube. 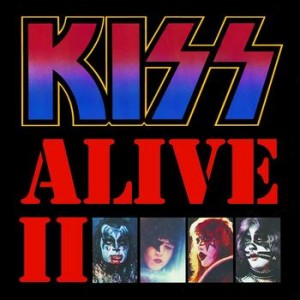 It’s possibly one of the most eclectic combinations of songs ever, but I used to listen to these tracks over and over again when I was 11 years old.  My brother and I committed George Carlin’s routine to memory and to this day, we can still rattle off sections from it.  In the original broadcast version, the Sha Na Na medley is interrupted with a horrible number by the late Johnny Ray.  I removed that song from this and stitched the two ends of the Sha Na Na performance together.  Don McLean’s version of “American Pie” is a shortened version of the epic tune but it’s still a great performance as it’s just McClean and an acoustic guitar with no other accompanying artists or backing vocals.  As for the Kiss medley…Well, it absolutely blew me away.