Go ahead and file it in the “so bad, it’s good” category. After all, “Basher Malone,” a 1988 episode of the cult classic horror series Tales from the Darkside isn’t exactly without its charm. And hey, it’s built around the seedy world of territory-era pro wrestling, which is something that should strike a chord with nostalgia buffs far and wide. 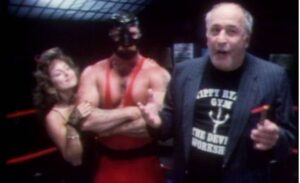 Vic Tayback and friends, from the “Basher Malone” episode.

The story is built around a feud between “good guy” Basher Malone and a gym owner and promoter named Tippy Ryan. Tippy was played by Vic Tayback, who is best known for his role as Mel Sharples on the 1980s sitcom Alice. His arch-enemy, Basher Malone, was portrayed by Steve Strong. ‘88 was, of course, the heyday of Hulkamania, and a lot of Basher’s shtick seemed to be modeled after Hulk Hogan—although there was also a hint of an anti-Ric Flair persona mixed in for good measure.

“Kids need a righteous hero like myself to look up to. A square-dealing, straight-shooting, clean fighting man … And kids, don’t forget what the Basher yells you: Brush your teeth after every meal, do your homework, and listen to your mom…”

After Basher Malone vanquishes all of Tippy’s best men in the ring, Tippy gets a call from “Old Scratch” offering to send up one of his best bad guys from the netherworld down below to settle the score with Malone. Tippy challenges Basher to do battle with his sinister new grappler, telling Malone that he’ll close up shop forever if the babyface wins their no-holds-barred contest.

Malone brings his elderly mother to Tippy’s gym at midnight for the fight and Tippy summons his demonic wrestler Trog via a portal in a Pepsi machine. The stakes are high, as Basher puts his title, his career, and his status as a role model on the line against the Devil’s best wrestler. 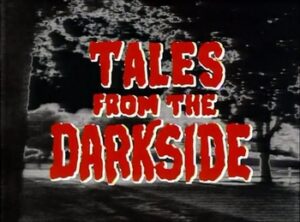 The ending is easy enough to predict: Despite a few twists and turns, Basher Malone vanquishes Trog, who carries Vic Tayback back to hell through the Pepsi portal. And even though this all sounds kinda awful, it’s fun to watch, complete with cheesy sound effects and a weird soundtrack that’s comprised mostly of bass and synthesizer licks. It’s really a fun, mindless diversion for wrestling fans and horror aficionados alike and, truth be told, watching the video isn’t a bad way to spend 20 minutes of your life.

The story doesn’t end for Basher Malone and Trog with the closing credits of Tales from the Darkside. Trog, who went by the name of Magic Schwarz, wrestled from 1983 to 1990. His personal website details his experiences through a number of professions, including his work as a wrestler in AWA and NWA.

As for Steve Strong, he was featured in the cult wrestling film Grunt! Strong also attained notoriety as an artist under his actual name, Stephen Cepello. He has painted two portraits of his fellow wrestler Jesse “The Body” Ventura, including one that was displayed in the Minnesota State Capitol.

This entry was posted in professional wrestling and tagged Tales from the Darkside, Vic Tayback, wrestling. Bookmark the permalink.