Upon reading Stefan Sullivan’s Marxism for a Post-Communist Society years ago, I was somewhat excited by the work, not so much for Sullivan’s basic conclusions (including his assertion that it is necessary to separate those like Luxemburg and Lenin from the original works and world view of Marx and Engels) but because the work seemingly represented the possibility of a new paradigm through which Marxism could be resurrected in new contexts following the effective denouement of the world communist movement that unfolded between 1989 and 1991. Perhaps in retrospect, I was more excited by Sullivan’s work because he drew heavily from the Marxists Internet Archive – an endeavor very close to my heart for the better part of two decades now – for his book (a fact which he acknowledged in a nicely-written postscript to the work).* 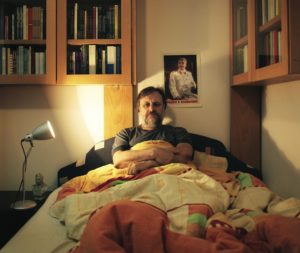 Slavoj Žižek at his apartment in Ljubljana, Slovenia, 2010

Nevertheless, the fundamental ideas behind Sullivan’s work – that is, the reimagining of Marxism as a formidable force through which the 21st century society could be overhauled to be as fair and as just as possible – resonated with me. What I wanted to see was a kind of sequel to the work entitled something like, “Marxism for an Information-Based Economy.” In fact, I actually contemplated the idea of taking on something like that myself, but I eventually realized I lacked the time, patience, and (in all likelihood) the intellectual capacity to produce anything remotely coherent out of this idea.

While I ultimately filed this idea near the back of my brain, it has returned to the forefront for me a few times, and I have hoped to discover the concept articulated in the work of a contemporary Marxist. The closest I have come thus far is a work by Slavoj Žižek entitled “How to Begin from the Beginning,” which I discovered in the 2010 volume The Idea of Communism. In this piece, Žižek notes that the proletariat of today is effectively comprised of three groups: “Intellectual laborers full of cultural prejudices against the ‘redneck’ workers; workers who display a populist hatred f intellectuals and outcasts; (and) outcasts who are antagonistic to society as such.” 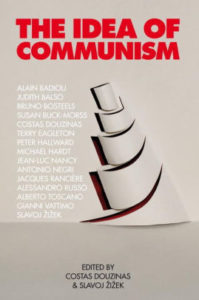 Of comparable significance (and articulated in greater detail) is Žižek’s analysis of massive profits generated by and through something that he refers to as the “general intellect”:

“… when, due to the critical role of the “general intellect” (knowledge and social cooperation) in the creation of wealth, forms of wealth are increasingly “out of all proportion to the direct labour time spent on their production,” the result is not, as Marx seems to have expected, the self-dissolution of capitalism, but rather the gradual relative transformation of the profit generated by the exploitation of labor-power into rent appropriated by the privatization of this very “general intellect.” Take the case of Bill Gates: how did he become the richest man in the world? His wealth has nothing to do with the cost of producing the commodities Microsoft sells (one can even argue that Microsoft pays its intellectual workers a relatively high salary). It is not the result of his producing good software at lower prices than his competitors, or of higher levels of “exploitation” of his hired workers. If this were the case, Microsoft would have gone bankrupt long ago: masses of people would have chosen programs like Linux, which are both free and, according to the specialists, better than Microsoft’s. Why, then, are millions still buying Microsoft? Because Microsoft has succeeded in imposing itself as an almost universal standard, (virtually) monopolizing the field, in a kind of direct embodiment of the “general intellect.” Gates became the richest man on Earth within a couple of decades by appropriating the rent received from allowing millions of intellectual workers to participate in that particular form of the “general intellect” he successfully privatized and still controls. Is it true, then, that today’s intellectual workers are no longer separated from the objective conditions of their labor (they own their PC, etc.), which is Marx’s description of capitalist “alienation”? Superficially, one might be tempted to answer “yes,” but, more fundamentally, they remain cut off from the social field of their work, from the “general intellect,” because the latter is mediated by private capital.”

When it comes to Žižek, it’s unfortunate that there is a kind of “love him or hate him” mentality among those on the left and all too often, it seems like this is because Žižek has criticized someone’s favorite philosophical concept, political line, or personal hero. It’s true that because of some flaws in his ideas, Žižek cannot and should not be accepted as a messianic figure in the Marxist movement of today, but Žižek’s analyses are far too important to be summarily rejected. Where there are principles of merit, they surely require close consideration and study as those with the common world view espousing “fraternity, quality, and liberty” seek to build a better present and the best future imaginable.