Written in July 2015 for the site “Suicide Dive,” this piece was originally entitled, “Yes, It Really Happened: When Politics Met Wrestling” and it included this preface:

“Yes, It Really Happened” is Suicide Dive’s weekly throwback to weird, lesser-known angles and stories from the past. We’ll revisit some of these not-so-classic moments of yesteryear, providing links, pictures and videos along the way. Got an idea for a future installment? Leave a note in the comments section below. 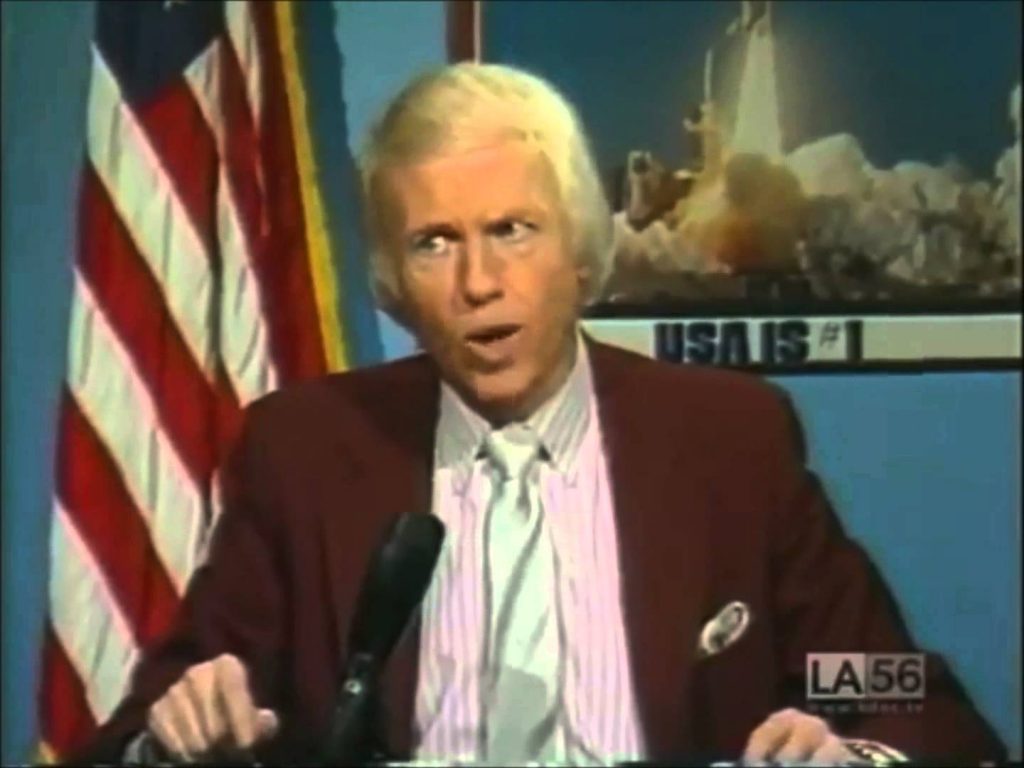 Long before the likes of Jerry Springer, Steve Wilkos, or even Morton Downy Jr. there was Wally George. Widely regarded as the founding father of “combat television, the platinum-coiffed television host introduced America to the loud-in-your-face confrontational style that is a mainstay on today’s afternoon lineup. He seasoned the mix with a healthy amount of over-the-top jingoism and high praise for then-President Ronald Reagan, often ruffling feathers of his political foes with insult-laden tirades and hyperbole. In some respects, it was a simpler time…

Wally George was the ultimate “right fighter” of his day, taking on any and all subjects he deemed improper. He hosted adult film stars, metal and punk rockers and—somewhere along the way—he turned his attention to the world of pro wrestling. It’s worth noting that back in those days, it was an open secret that wrestling was scripted and predetermined. Even more importantly, wrestling was absolutely on fire and on the rise as a pop culture institution and Hulk Hogan was the face of the business.

Wally wasn’t having it, though, and in his eclectic cavalcade of guests he included wrestlers of all sorts, including macho heels, Amazonian women, and even a mud wrestler or three.

The TV host’s fixation with pro wrestling is best viewed with a grain of salt and the benefit of hindsight. A prime example is his mid-‘80s meeting with bodybuilder and wrester Don Ross who was working in the ring as Ripper Savage. Things got heated quickly, as Savage started working the crowd from the moment his glutes hit Wally’s appropriately-named “Hot Seat.” with some cheap heel heat, likening Wally’s rabid crowd to a “Nazi youth meeting” and calling them “animals.”

Later in their discussion (which was really more of a yelling match), Wally took some shots at Ripper, openly questioning the legitimacy of his work inside the squared circle.

“What kind of theatrics was that you were playing in the ring there, huh?” George jabbed. “I want to tell you one thing, Ripper Savage: You are not a wrestler… What you are is an actor–and a bad actor!”

Wally also welcomed gargantuan female grappler Queen Kong — better known to some via the moniker Matilda the Hun — to his show, and in a particularly antagonistic interview, he declared her to be “a disgrace to womanhood” as his peanut gallery chanted, “Sick! Sick! Sick!” For her part, Kong dismissed Wally as a “wimp” and ridiculed his audience relentlessly. At one point, Wally asked Quennie if she could go toe-to-toe with Hulk Hogan and she replied that she’d have been up for the challenge for sure.

“When Hulk Hogan got through with you, maybe you’d look like half a woman again,” Wally quipped.

Of course, a healthy amount of all Wally’s material was shtick and theatrics. In fact, he even made a cameo in the 1985 cult classic Grunt! The Wrestling Movie. As his career progressed, Wally George’s television escapades actually came to resemble the world of pro wrestling without the confines of turnbuckles and ring ropes. He even staged a back room brawl with disc jockey Rick Dees during their lengthy public feud.

Nowadays, WWE does a decent job of transitioning real-world celebrities into the confines of their parallel universe, albeit for very short periods of time. But the peak of Wally George’s fame came at a different time when kayfabe was the reality and folks didn’t think too hard about that nebulous place where sports and entertainment overlap.