Between Catholicism and Marxism 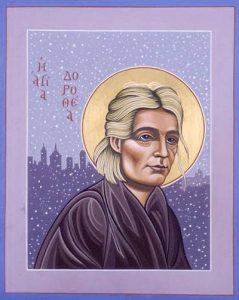 For much of the 20th century, the Catholic Church and the worldwide communist movement were pitted against one another, portrayed as natural enemies by the highest echelons of the Church hierarchy, including the virulently anti-communist Pope John Paul II. It was a narrative that many were all too willing to accept.

To be sure, there wasn’t much overlap between Marxist circles and the Catholic community at large, with a few exceptions, including those who were drawn to Liberation theology in places like Nicaragua and El Salvador. Dorothy Day, a Lay Catholic who is now on the path to canonization, is another noteworthy exception to the Catholic Church’s general line on Marxism during the Cold War, for although she eventually distanced herself from formal association with communist organizations, she recalled her interactions with Marxists favorably, even in the aftermath of the first Red Scare.

The following excerpts are from the 1943 essay “About Mary,”[1] which appears in the Liturgical Press publication Hold Nothing Back: Writings by Dorothy Day.

“Across the street from where I lived, I think it was on St. Peter Street, there was the side entrance to the cathedral. Every night I used to go in there for Benediction. Perhaps I was influenced by reading the novels of Huysmans that I had borrowed from Sam Putnam’s library in Chicago. My roommate was Mary Gordon (when I last heard of her, she was working for the League for Spanish Democracy in Chicago, a Communist affiliate), and that Christmas she gave me a rosary. So in this case I was led to the Church through two Communists. I did not know how to say the rosary, but I got a little prayer book at a Catholic book store which I often visited, and I learned how.

One summer right after I became a Catholic I was taking care of a number of little boys from a school “for individual development.” Together with Freda, my next-door neighbor, whose friend it was who ran the school, we took the responsibility for about a dozen boys between eight and twelve. Quite a few of them were children of Communist parents, and several of them have grown up now to be members of the Young Communist League. I used to read them the “Little Flowers of Saint Francis,” which they enjoyed immensely, and they used to command each other “in the name of holy obedience” to perform this or that act of mischief. They also used to ask me to burn candles for them before the little blue statue of the Blessed Mother. Do any of them remember her now?”

Dorothy Day also drew upon her knowledge of the formative years of Marxism as a movement in her book Thérèse: A Life of Thérèse of Lisieux. Published in 1979, Thérèse includes chapters on the early lives of Saint Louis Martin and Saint Marie-Azélie Guérin, the parents of Saint Thérèse of Lisieux. 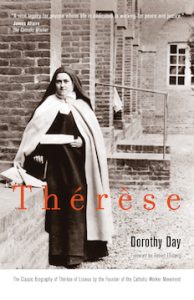 “Louis Martin lived in the days of the beginnings of revolutionary thought, of Kropotkin, whose thinking was shaped by the watchmakers of the Jura mountains where Louis himself studied. He lived in those vital years of 1850-1890 when Marxism and anarchism struggled for possession of the First International. He lived at the same time as Proudhon, the unMarxian socialist, as Father de Lubac, S.J., called him, who said “Property is theft.” I have often wondered whether in his long years of apprenticeship Louis Martin ever engaged in discussion of the social problems of the day. I am sure that there must have been some talk of the revolution of 1848, of the condition of the working classes.”

Though critical of “Bolshevism” in a number of her writings, Dorothy Day also expressed support for imprisoned American communists in 1949 and publicly sympathized with Fidel Castro and the Cuban Revolution in 1961.

Copyrighted quotes presented under the terms of Fair Use. 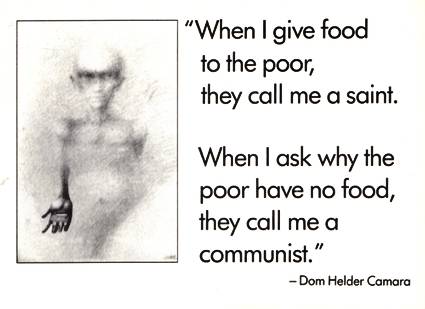