Some years ago, I bought an odd collection of items at a garage sale, including some Russian pins, a Masonic Bible, and a stack of about 20 black and white photos. I didn’t know the people in the photos, but they were very interesting and I kind of got the feeling that it would be a shame to just leave them there, as they were probably bound for the trash can if they didn’t sell. I think I ended up paying $2 for the photos (and just a bit more for the other aforementioned items.)

The pictures ended up sitting in the drawer of my computer desk for years and I always hoped that I might ultimately do something cool with them, but I couldn’t seem to come up with many worthwhile ideas. After all, they were vacation photos of people who I didn’t know and I didn’t have much insight into their origins. However, I got some fresh inspiration when I revisited a collection of slides that included the missile silo hatch photo featured in another blog post. The response I got to that particular post via social media mortivated me to give my small batch of garage sale pics another look. My initial idea was to try and ascertain when the black and white pics were originally taken, but there are really no clues anywhere on the photos – no date stamps or anything like that. There are, however, a few handwritten notes on the back of the photos with captions like “Along the West Branch River” and “The log jam on Sucker Creek.” After a bit of research, I ultimately determine that the photos were taken in central Michigan. I still couldn’t figure out the exact date of the pictures, though, and the best I could figure is that they were from the mid 1960s. I had, of course, hoped to determine something more specific.

In reading a bit more online about the history of photo paper and the like, I actually stumbled upon something even more fascinating: An endeavor called Algorithmia has created a free service that colorizes black and white photos by utilizing deep learning models. I was intrigued, so I scanned a photo from my garage sale batch for a test run. On the back of the picture was the handwritten caption “White birch on Sucker Creek.” The results – rendered in less than one minute – were breathtaking. Indeed, after holding on to these photos for years, I was finally able to look at one of them in a whole different light, ostensibly seeing the very the scene that the now anonymous original photographer saw somewhere around 50 years ago. 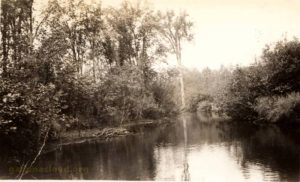 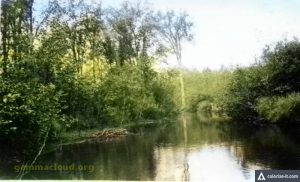 I’ll be sharing additional colorized photos from this batch (and other sources) in the near future.