NOTE: After I shared this via social media, some intrepid friends launched their own investigations and came up with a plausible conclusion. I have added their suggestions at the end of this article.

As I previously mentioned in my post about the Mitchell Corn Palace, I’m slowly working my way through a few batches of 35mm slides that I have acquired at thrift stores and other outlets over the years. Here’s another one, and it’s a bit of a head-scratcher: 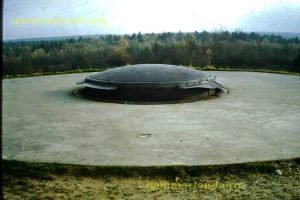 Setting and subject unknown, Jan. 1980
Click on the picture for a larger image.

This slide is dated January 1980 and the scene seems like something out of an episode of the old show In Search of…  It is somewhat difficult to figure out the approximate dimensions of the main object. In some respects, it looks like a vent or skylight for an underground chamber. Rather than giving away any clues to the location of this scene, the forest and hills in the background add a bit to the mystery of it all.

I have tried a few times to identify the scene or location shown in the photo and I have yet to come up with any clues.

At this point, I welcome any suggestions as to what the image depicts. If your info checks out, I’ll give you credit here on the site.

The image above was produced using a Wolverine F2D-8 slide & negative scanner.

UPDATE (March 12, 2017): My friend Fowaz noted that the photo above looks a lot like a hatch for a missile silo, sharing a number of images for comparison [Image 1 | Image 2 |  Image 3]. Another friend — who served in the Air Force until retirement — agreed, adding that the hatch might have been for a Titan missile silo.