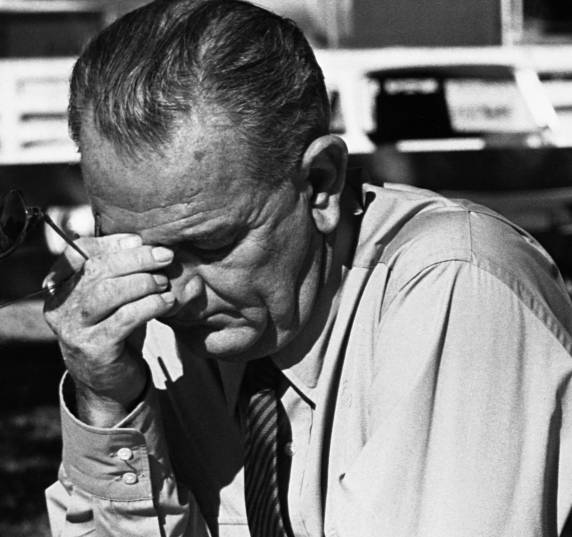 Lyndon Johnson reacts to word of new problems in Vietnam while at the LBJ Ranch in 1964. (image via History.com)

Although Donald Trump’s fast-and-loose relationship with the truth dominates today’s 24-hour news cycle, the ability to perpetuate brazen half-truths and outright lies seems to be something of a common thread with regard to America’s cavalcade of chief executives. From the Bay of Pigs debacle to the invasion of Grenada to conspicuous absence of WMDs in Iraq – not to mention hundreds of other reprehensible incidents and affairs both large and small – American presidents have proven themselves to be adept and overzealous at distorting reality to serve their political objectives.

Dan Rather’s 2012 autobiography Rather Outspoken: My Life In the News provides a few anecdotes of presidential misadventures, including a particularly stark example of LBJ’s drive to stuff his own words down the proverbial memory hole:

One story George [Christian ] told me from early in his time as press secretary illustrates his approach. “Mr. President, I am pleased to be here and honored to be of service to you and to the country. But I am no miracle worker, and I want to disabuse you of that. I cannot turn things on a dime here. Let’s take your problems one at a time. I am not going to try to solve everything. Give me the problem that worries you the most, and let me begin by taking on that one.”

“George,” LBJ responded, “everywhere I look those sum’ bitches— the press—are quoting me as saying, ‘I will not send American boys to do what Asian boys should be doing for themselves.’ I am supposed to have said that early in our involvement in Vietnam, and George, I never said it. Still, it keeps coming back to haunt me. Now it s become some version of g**damn urban myth. I am tired of getting hit over the head with it. Fix it.”

George returned after a few days to give Johnson a report on what he discovered. “Mr. President, I don’t want you to get mad at me. I haven’t solved this problem, but I want to show you the dimensions of it.” At that, several interns entered the office carrying stacks and stacks of newspapers and magazines. “Mr. President, every one of these publications has you saying it—not just as an indirect quote, but in direct quotes.”

“That’s what I am telling you, George!” Johnson shouted. “They keep printing it, but it isn’t true. I never said it.”

A couple of days later, Christian returned to the Oval Office with a tape recorder. He placed it on the desk and said, “Mr. President, I don’t want you to get mad at me, but the puzzle is deepening.” With that, Christian pressed “Play” on the recorder, and there came the unmistakable voice of LBJ saying the quote.

Johnson’s temper got the better of him once again, and he demolished the tape recorder with his polar bear paws. “G**damn, George! I didn’t realize what a complete idiot you really are. You know what these guys do: They piece these things together, they take a little razor blade, cut a piece here and add there.”

“I believe you, Mr. President,” Christian answered patiently, “but I wanted you to know that these recordings are everywhere.”

About a week later, LBJ hosted a group of guests in the White House screening room for a showing of The Alamo, with John Wayne. George was in attendance. “Mr. President, I’d appreciate it if we could get together, just the two of us, after the movie. I have something I’d like you to see.”

After the guests departed, Christian gave the signal to roll his footage. Up on the full screen came the unmistakable image of LBJ, standing on the bumper of a limo on a darkened street corner in Philadelphia. Johnson was speaking through a bullhorn, saying, “I will not send American boys to do what Asian boys should be doing for themselves!”

“Damn, George,” Johnson said as the lights came back up. “You sure that’s me?”

Excerpted quotes presented under the terms of Fair Use.

“Kenneth, what is the frequency?”

This entry was posted in and so on..., Cold War, news and tagged Dan Rather, LBJ, lies, media, truthiness, What's the frequency Kenneth. Bookmark the permalink.