On Salinger and psychopathology 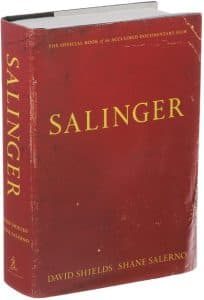 Via social media, I recently noted that I had become accidentally immersed in the book Salinger, an exhaustive biography of J.D. Salinger published by David Shields and Shane Salerno. About two-thirds into the work, I realized that my opinion of the Catcher In the Rye author was already irrevocably changed, with respect to Salinger as an author and as a human being. To be precise, I found the emerging portrait of to be “completely unlikeable and virtually irredeemable” before I had even reached the final chapters of the story of his life.

Now that I am completely finished with the tome, I do indeed find Salinger to be reproachable in virtually every respect, from his unconscionable treatment of girls and women in his personal life to his contentious relationship with his admirers and devoted fans. These foibles – and many, many more – are thoroughly examined by Shields and Salerno in their lofty endeavor.

To be sure, the book Salinger is not without its faults. One especially astute review correctly characterized the work as a “sprawling, cut-and-paste collage,” for although it is an extensive and in-depth review of primary resources; the work often degenerates into yawning patchwork of reminiscences built around selected themes. Put simply, Salinger often lacks the kind of coherent narrative voice readers should expect from a serious work. As such, it’s less of a biography and more of a patchwork of recollections and excerpts. The general tack of Salinger is hardly that of a charitable portrait of the artist, ultimately taking the shape of a lengthy indictment as the book rolls on. Indeed, the lion’s share of Salinger’s involvements and interactions with those close to him, seem to end in estrangement, shame, and sorrow as per the reams of qualitative data amassed by the book’s authors.

Where Shields and Salerno try and move towards a more definitive narrative ultimately proves just as problematic as the above-noted defects in their scholarship. In Chapter 18, entitled “Assassins,” the authors review the cases of high-profile celebrity attackers John Hinckley Jr., Mark David Chapman, and Robert John Bardo, noting that each man cited Salinger’s magnum opus Catcher In the Rye as a key influence in their respective crimes. But the authors’ arguments extend well beyond a simple (and arguably more plausible) assertion that violent art can lead to violent acts. Rather, Shields and Salerno practically implicate Salinger in the crimes of Hinckley, Chapman, and Bardo, brazenly adopting a post hoc ergo propter hoc argument that is effectively built upon the notion that each man processed the ideas and themes of Salinger’s work by employing logic and rational thought.

The Catcher in the Rye reemerges in the 1980s, misinterpreted as an assassination manual.

DAVID SHIELDS: There’s a huge amount of psychic violence in the book; Holden’s voice is full of hellacious fury. If you read the book out of neediness or desperation, you will read Holden’s antipathy to the culture as a license to kill. In the “wrong” hands, read the “wrong” way, the book’s emotional rage can become an endorsement to express your hatred toward “phonies” through violence.

… The complicating factor in Salinger’s case—the deepening factor—is the extraordinary intimacy he creates between narrator and reader, and this intimacy is mixed with sublimated violence. He’s so good at creating a voice that seems to be practically caressing your inner ear.

It’s as if the assassins and would-be assassins who read The Catcher in the Rye are reading the book too literally. Everywhere Holden goes—Pencey, Manhattan, his parents’ apartment—he’s an utterly powerless individual. What the book shows you is how Holden comes to accept and even embrace the weakness—the brokenness—within himself, within Phoebe, within everybody. If you’re reading the book through an especially distorted lens, you feel so acutely Holden’s powerlessness that you say, “Yeah, I feel powerless, too,” and you don’t make the crucial leap that Holden finally does and Salinger always does at the end of every book and what the imaginative reader is asked to do…

It is of course important to note that all three of the above-noted attackers were diagnosed with schizophrenia, a fact that more or less eludes Shields and Salerno in their analysis. Most people who have had either personal or clinical interaction with a person suffering from schizophrenia likely understands that there is seldom a basis in reality (especially one of cause and effect) that properly justifies the actions of an affected person who is in the throes of his or her illness. Consider the following symptomatology, as described by the DSM Library:

Schizophrenia is the prototypical psychotic disorder. Not only is it the most common psychosis, but schizophrenia tends to involve abnormalities in all five of the emphasized symptom domains: hallucinations, delusions, disorganized thinking (speech), grossly disorganized or abnormal motor behavior (including catatonia), and negative symptoms.

For good measure, the authors include comments from subjects who maintain that Salinger himself probably did not intend for anyone to be victimized because of his writings. But on the whole, these passing assertions do not stand up against the unmistakable arc of the “Assassins” chapter of Salinger. 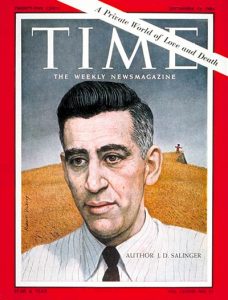 Readers of Salinger are thus presented with a slippery slope: If they are to accept the conclusion that the attempted assassination of Ronald Reagan and the murders of John Lennon and Rebecca Schaefer were a proximate result of The Catcher In the Rye, they must also accept such notions that the Beatles were responsible for Charles Manson’s belief that their White Album was a manifesto for race war in America or that David Berkowitz’s dog was complicit in the “Son of Sam” murders.

My purpose in raising the above point is not to defend J.D. Salinger or his work. Indeed, taking the entire record of Salinger’s life and work into account (with respect to what is presented by Shields and Salerno and beyond), it certainly appears difficult to dispute that the celebrated author earned every iota of his reputation as an extremely unpleasant person. Misogyny, egotism, and elitism were pervasive and recurring defects in his character by an overwhelming majority of firsthand accounts. But to blame him for inciting murder based upon the words and actions of individuals who were indisputably and seriously mentally ill is beyond the pale of anything that can be seriously considered as a responsibly crafted critique.

This entry was posted in and so on..., books, psychology and tagged Holden Caulfield, literature, psychology, Salinger, schizophrenia, The Catcher In the Rye. Bookmark the permalink.