Drawn from the narrative commentary in Ten Ever-Lovin’ Blue-Eyed Years With Pogo, Walt Kelly’s assessment of the rhetoric and movements of his time bears striking similarities to America’s present-day sociopolitical cacophony.

NINETEEN hundred and fifty, a year that John Gunther once referred to as “bizarre,” worried me because its daily record was providing unwarranted competition in the comedy field. Against the numbing background of the Korean War, we had largely finished with the uneasy flirtation between this country and Russia which had followed the peace of 1945. We were seeing spies, communists and other subversives under beds which we had never made. 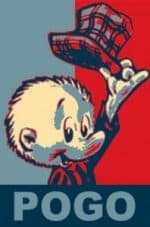 Mr. McCarthy, a gentleman from the progressive state of Wisconsin, suddenly abandoned his pretensions to anonymity and leaped upon the stage somewhat like John Wilkes Booth. He waved varied cards bearing a variety of figures concerning various people hiding in the State department who were carrying bombs, stealing secrets and sucking blood.

Citizens, solid and squashy, were tried for crimes, some of which were invented for the occasion, in the press, in committee, in the parlors before the TV sets and in the chattering brains that pass for informed minds in country club, saloon, factory and executive spa. A wise and accomplished editor said to me, “This is a period when I wouldn’t put my name on the application blank of a garden club.” This was good advice. My experiences in gardens have always led to trouble.

Primitive campfires began to cheer the souls of those who prefer the black of night. We were sure that Russia was arming to the teeth. China entered the Korean catastrophe. Mr. Truman ordered a 1950 model H-bomb, useful for only one purpose. (Using the automobile alone, and without really trying, we had knocked off 366 of our own constituents in the cheery holiday weekend at the beginning of the year.)

We decided to prepare for what we were not sure. American Legionnaires staged a mock invasion of Mosinee, Wisconsin, apparently with the supine acquiescence of 1,400 inhabitants, to show the evils of “totalitarianism.” No one said whose.

True, we felt we had to rearm and to be wary, but few signs of the well-balanced mind showed anywhere outside the lunatic asylums… 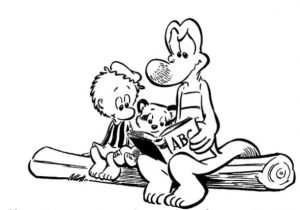 This entry was posted in and so on..., comics, political economy and tagged Donald Trump, Harry Truman, Islamophobia, McCarthyism, Pogo, Walt Kelly. Bookmark the permalink.