Among the more curious items that I have acquired over the years is a small collection of 35 mm slides. Some the slides are professional photos that are from sets produced for tourists. Others are from private collections, unlabeled and virtually untraceable at this point. Many of those from the aforementioned group are stamped with the month and year they were processed, but the specific locations of the scenes as well as the names of the photographers are now lost to the ages.

I’ll share samples from my collection from time to time, beginning with a couple of photos featuring the Mitchell Corn Palace. According to Wikipedia and other sources, the Mitchell Corn Palace is an event venue located in Mitchell, South Dakota that is covered in murals and designs made of corn and other grains. The building is redecorated every year using a style described by the facility’s official site as “earchitecture.”

The images below were produced using a Wolverine F2D-8 slide & negative scanner. 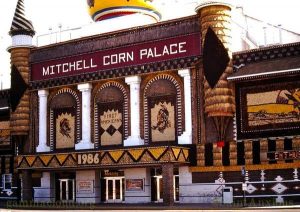 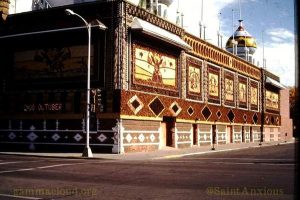 This entry was posted in and so on..., Forgotten photos and tagged 35mm slides, Mitchell Corn Palace, South Dakota. Bookmark the permalink.