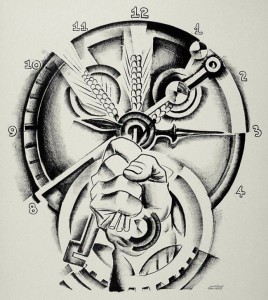 Some years ago, a fellow traveler broke down the relationship between the working class and the employing class for me with a rather succinct explanation.

While thumbing through Theories of Surplus Value recently (about 15 years after the above-noted conversation, for what it’s worth), I happened upon Karl Marx’s more detailed and precise exposition of capitalism’s yin and yang.

“It is the constant aim of capitalist production to produce a maximum surplus value or surplus product with the minimum capital outlay; and to the extent that this result is not achieved by overworking the workers, it is a tendency of capital to seek to produce a given product with the least possible expenditure – ECONOMY OF POWER AND EXPENSE. It is therefore the economic tendency of capital which teaches humanity to husband its strength and to achieve its productive aim with the least possible expenditure of means.” 1

The passage was also cited by Joseph Stalin in his seminal work, Economic Problems of the USSR, albeit via a slightly different translation.

My friend’s point in sharing this kernel of wisdom with me was to point out that if you’re lucky enough to get a little bit of enjoyment or personal fulfillment out of the daily grind, you’re coming out ahead slightly ahead in capitalism’s “hustle.”

This entry was posted in and so on..., marxism, political economy, Stalin, USSR and tagged capitalism, Joseph Stalin, Karl Marx. Bookmark the permalink.