Most folks who have seen my personal library room in real life know that it predominantly a repository of political economy in the Marxist tradition. Over the course of the past two decades or so, I have managed to collect a great deal of the Collected Works of Marx and Engels, V.I. Lenin, Stalin, Mao and many others. To be sure, I have accumulated a respectable quantity of volumes featuring classic literature as well as numerous texts on science, philosophy, and other subjects. But my collection has been noticeably – and, to some extent, purposefully – short on books about religion for some time. 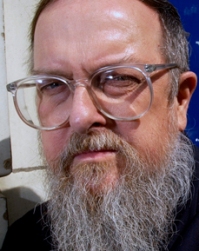 However, interests wax and wane over time and recently I have become receptive to reading about religion again, mostly with regard to Catholicism and Orthodox Christianity. My renewed interest led me to some eBay searches for books and icons and several weeks ago, I stumbled upon a collection of unusual Catholic and Orthodox books. I watched the auction come and go with no bids and thought for sure that it would not be re-listed for a while, but then the lot resurfaced, I ended up placing a bid and ultimately winning the batch with no competition.

I had noticed that the lot was listed by a third party seller and I know those businesses often handle estate liquidation. When I got the books in the mail, I noticed they all seemed to have belonged to the same person, a man named Thomas E. Klocek from Chicago. Out of curiosity, I ran a Google search and learned that Mr. Klocek had indeed passed away in 2013. I was also surprised to know that he had a brief moment of fame – or perhaps infamy – almost a decade prior to his passing.

The regrettably defining moment for Thomas Klocek occurred in 2004 and it has been litigated a few times over, at least once in the courts and again in the proverbial court of public opinion. Because of that, I won’t wade too far into the details too much here but I will share a few links at the bottom of this piece so people can review accounts of the incident and the subsequent fallout.

Basically, it is generally agreed that Thomas Klocek had a run-in with a pro-Palestinian students’ organization (Students for Justice in Palestine) while he was a teacher at DePaul University. Things got heated, Klocek was escorted away from the students, and he returned for another go-‘round. In the end, Klocek was chastised by the university, refused to apologize, and was ultimately relieved of all teaching duties as a result of the incident.

I should note at this point, that I categorically disagree with most — if not all – of what Thomas Kloceck reportedly did and said in his confrontation with the SJP students, particularly his insistence that American activist Rachel Corrie was not murdered by Israeli soldiers when they ran over her with a bulldozer in 2003. Indeed, I find Klocek’s positions on matter of Palestine (most notably his position that Christians were more entitled to Palestinian land than Jews or Muslims) to be incomprehensible. 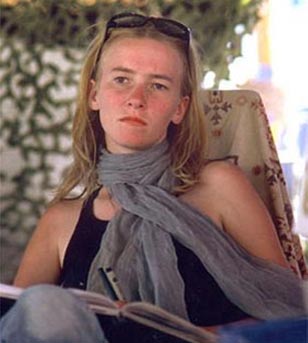 It is both odd and unfortunate that Klocek effectively destroyed his own career as an instructor effectively because of his inability to disagree with respect, as well as his unwillingness to critique his own approach to a controversial and multifaceted topic such as the Palestinan question. Even more regrettable was the fact that he allowed his own struggle with DePaul’s administration to be hijacked by right-wing bloggers (something that continues at the time of this writing). Kloceck himself said that he was an unlikely poster boy for many of those who came to his defense, stating that had the student organization that he had come across been comprised of “militant Zionists,” the situation might have ended in the same manner as his dust-up with SJP representatives.

Nevertheless, Thomas Kloceck made his own decisions, owned them, and (as far as I have determined) retained the same opinions until the end of his life. Looking through his books, it is undeniably clear that his own spirituality was of deep importance to him. The texts, which are in English, Slavic, Russian, Ukranian, and other languages, include his own handwritten notes (in English) and there are prayer cards stuck in a number of the books. Some of the prayer cards are from funerals, including one from that of Peter N. Kogeones, who passed away in 1990. Kogeones was a Chicago area restauranteur who was affectionately known as “the unofficial Mayor of Greektown.” In another book, I found a commemorative card from Pope Paul VI’s 1965 visit to new York.

One of the volumes even includes a lengthy personal inscription dated 1985 in which the person notes that the book was a gift to Klocek and he goes into some detail regarding his relationship with Klocek and Klocek’s late father.

The small collection of books effectively offers a window into the person Thomas E. Klocek was behind his controversial (and reprehensible) views on the situation in Occupied Palestine. As an unabashed bibliophile and student of history, I’ll be more than happy to give these books a good home for as long as they are in my possession. 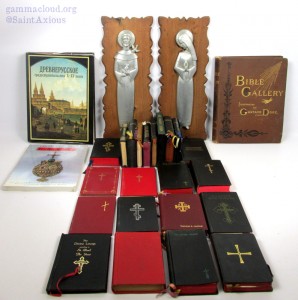 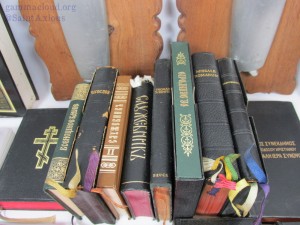 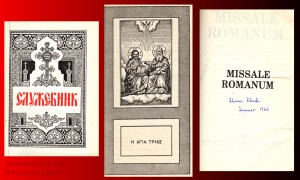 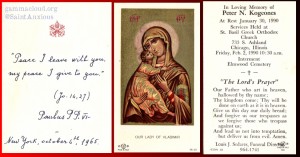