Mother Teresa at the grave of Enver Hoxha

Every so often, I get a weird idea and can’t get it out of my head until I arrive on a proper resolution. A fine example of this was the time I watched the Christopher Hitchens’ 1994 quasi-documentary Hell’s Angel. Based on Hitchens’ 1995 book The Missionary Position: Mother Teresa in Theory and Practice, the short film is, at its core, a bile-filled rant about the life of the Albanian woman who would (eventually) be canonized for her work with the sick and poor in Calcutta, India 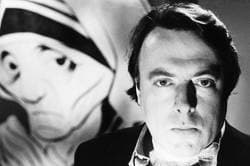 In what is arguably the zenith of Hitchens’ on-screen dissection of the legacy of Mother Teresa, the late essayist (himself an avowed atheist) recalled his subject’s controversial 1991 visit to the land of her birth, which included a surprising visit to the grave of Enver Hoxha. Hitchens goes on to trash Hoxha, referring to him as “Stalinist murder and despot.”

“Mother Teresa admires the strength of the powerful almost as highly as she recommends the resignation of the poor,” Hitchens said in Hell’s Angel. “When she visited her motherland of Albania, she appeared to take seriously St. Paul’s notorious assertion that ‘the powers that be are ordained of God.’ The Albanian authorities had obtained the world’s first officially atheist state. They had persecuted all forms of worship, except that of their leader, Enver Hoxha.”

Hitchens’ assertions on Hoxha’s Albania – a fast-moving combination of overgeneralization and inaccuracy – fade quickly into the mix as he moves to the next stage of his critique of Mother Teresa, a discussion of her relationship with Pope John II. Of course, John Paul II was himself the veritable antithesis of Enver Hoxha, not by virtue of his spirituality but because of his overt efforts to undermine and destabilize communist societies during his reign as pontiff. It’s a glaring contradiction, to be sure; mounting an attack on one person for paying respect to the architect of an atheist state while heaping further enmity on the same individual for her relationship with one of the best-known spiritual leaders of her day. But it fits together in Christopher Hitchens’ overarching narrative, which holds that every aspect of Mother Teresa’s existence must be subjected to extreme hostility and contempt. She had some unfortunate positions and associations, indeed. But Hitchens’ unbalanced critiques – which denied even the possibility that she had accomplished anything noteworthy or positive in her lifetime (much like his hit and run comments about Hoxha) – were always driven by his highly selective and decidedly personal agenda.

Although he was undeniably a talented writer and entertaining speaker, Christopher Hitchens lost credibility in my mind when he openly supported the administration of George W. Bush beginning in 2002. In fact, as Bush wrapped up his second term, Hitchens still held Bush in high regard and stated he had “no regrets” for publicly supporting Bush’s reelection. Around the same time, Hitchens renewed his attacks on Mother Teresa, denouncing her as “a fanatic, a fundamentalist, and a fraud.” It is something of a glaring contradiction in and of itself that Hitchens could roundly condemn the likes of Hoxha and Mother Teresa and then subsequently take up the  mantle for Bush, who once nonchalantly acknowledged that his decision to wage war against the people of Iraq had resulted in the deaths of an estimated 30,000 civilians in just two years’ time. (Subsequent and more comprehensive estimates of civilian deaths in Iraq place the final figure much higher, ranging between 112,000 and 124,000.) 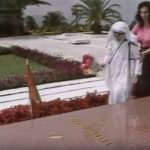 Hitchens’ simultaneous haranguing of Enver Hoxha and Mother Teresa ultimately led me to see both individuals in a different light. There’s some yin and yang there, to be sure. Mother Teresa likely has more adulators than detractors, and vice versa for Mr. Hoxha. And while there are likely a lot of folks who revile them both, the amount of people who hold them both in high regard is probably pretty slight. Still, I think it’s not entirely impossible to effectively reconcile them as being worthy of respect at some level, although I know many people would not agree with me on this point.

After a bit of reflection, I decided that I wanted a picture to more or less commemorate such an unusual point in time. It would confuse some people, for sure. But I felt like it was a poignant enough scene that, if I took it in on a regular basis, it might lead to some introspection and even a compelling conversation or two.

So the quest began, but I quickly came up empty in my search. I couldn’t find a high resolution still image online and a still frame from the Hitchens show wouldn’t be of suitable quality to print. I was sure that there would be a black and white photo of the scene in The Missionary Position, but I checked with a friend who said that it wasn’t in there – which is kind of surprising, given the Hitchens’ emphasis of the event in Hell’s Angel. So, I more or less figured that my quest was at an end unless I could find an artist willing to produce a rendering for me.

Then, shortly after the 2016 election, I saw a funny illustration online depicting a throw down between Joseph Stalin and the president-elect himself. A friend had shared it on Facebook but nobody really seemed to know the origin of the cartoon. A reverse image search via Google led me to the personal blog of artist Brett Marcus Cook who told me the picture was an original that he did on the fly, but he was kind enough to whip up a new one for a modest fee. 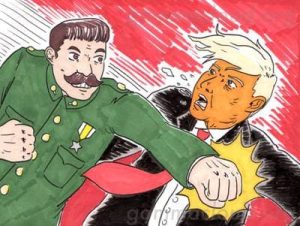 I then asked Mr. Cook about drawing the image of Mother Teresa at Hoxha’s grave and he agreed to give it a shot. I had a few specifications in mind for the scene, and I shared them in an e-mail:

After a couple of days, Mr. Cook shared with me his commissioned depiction of the scene, perfectly capturing my the vision that I had laid out over the course of our correspondence. And as happy as I was with the scan that he sent via e-mail, the hard copy that I received in the mail later in the week was even more impressive. 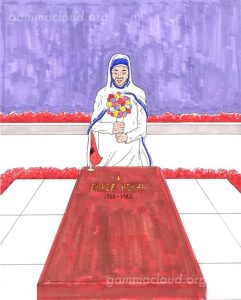 “Mother Teresa at the Grave of Enver Hoxha.”
Image by Brett Marcus Cook, 2017.

My original plan was to place the drawing in an ornate frame, adding another level of intrigue to the notion that anyone would commemorate such an unusual moment in time as the sight of such a revered figure in the Catholic faith visiting the tomb of a notorious communist. But in the end, I thought it would be best to go with a simple black mat and frame, complimenting the solemnity of Mr. Cook’s rendering. 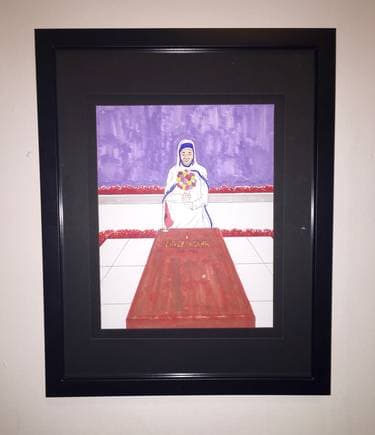 The picture now hangs on the wall of my office at work, marking a fleeting moment of communion between two people who, in my opinion, have been regrettably misunderstood by so many of their fellow human beings.

Further Reading:
Enver Hoxha on the Revolutionary and Reactionary Potential of Religion   The Espresso Stalinist
Nexhmije Hoxha on questions of crime and punishment   gammacloud.org
The Struggle Against Religion in Socialist Albania and the Closure of Its Religious Institutions in 1966-67   Alliance-ML