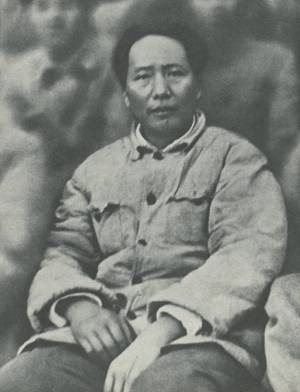 Chairman Mao at the Yenan Forum on Art and Literature, 1942.

The struggle between the proletariat and the bourgeoisie concerning literary and art thought often centres around the question of portraying characters. How should we observe, analyse and depict men—the main objects of portrayal in literary and art works? Answers from writers and artists differ, but in the final analysis, they boil down to two kinds, one conforming to the Marxist theory of classes and the other to the landlord and capitalist classes’ theory of human nature. They reflect two diametrically opposed world outlooks.

Typical of a Class or of Human Nature?

In the Talks, Chairman Mao pointed out: “This question of ‘for whom?’ is fundamental; it is a question of principle.” Literature and art serve a definite political line by reflecting social life through the portrayal of typical characters. To solve the question of “for whom?” in literature and art, therefore, it is necessary first of all to solve the question: What persons should we write about and which class’ ideal characters should we depict? This is the focal point of struggle between two different literary and art lines. The proletariat advocates that efforts should be made to depict worker, peasant and soldier heroes, whereas the bourgeoisie advocates the “quest for true men with human nature.”

What kind of persons are these so-called “true men with human nature”?

There are only two kinds. One is the devil in “human” skin, such as renegades who give themselves up to the enemy. Revisionists describe these renegades as “loyal to the Party and to the enemy.”The other kind is: The clothes are those of the workers, peasants and soldiers but the souls are those of the landlords and capitalists. We see in some works that the authors often regard the exploiting classes’ thoughts and feelings as the “common feelings of human beings” and forcibly thrust them into the inmost minds of the so-called “workers, peasants and soldiers.” This actually amounts to using the “bodies” of workers, peasants and soldiers as media to extol the “souls” of the exploiting classes, prettifying the human nature of the latter and vilifying the human nature of the proletariat and other labouring people.

If these so-called “true men with human nature” were allowed to dominate the literary and artistic as well as political stages, there would be no place for the proletariat and the masses of the people, and proletarian revolution and proletarian dictatorship over the bourgeoisie would be thrown to the winds.

More than 100 years ago, Marx said that the human essence “is the ensemble of the social relations.” In the Talks 30 years ago, Chairman Mao pointed out:

The struggle between the theory of classes and the theory of human nature in literature and art also manifests itself in the question of how to write about men.

Dictated by their exploiting classes’ standpoint and idealist world outlook, bourgeois writers and artists deny that the typical is a concentrated expression of class nature. 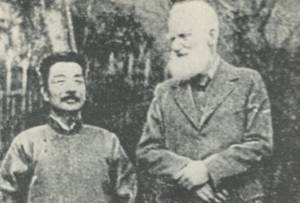 Revisionist writers preach that a typical character “first of all is a man” and “has things common to mankind”; they advocate using “the attitude of respecting and sympathizing with others” in the quest for “true men,” “true hearts” and “true feelings.” They describe all this as “common feelings of human beings” and babble that if we concentrate and generalize such “common feelings” we shall be able to concentrate and generalize life and portray “true men with human nature.” Citing many facts showing that” the joys and sorrows of human beings are not alike,” Lu Hsun[2] scathingly refuted this fallacy. Take “love” for instance. Men of different classes love entirely different things because their thoughts and feelings are different. As Lu Hsun said, the poor never have to worry about losing money on the stock exchange, and an oil magnate does not know the trials of an old woman collecting cinders. But revisionist writers, in the “quest for true men” through depicting characters with the supra-class “common feelings of human beings,” describe the bourgeois pursuit of personal gain and luxurious and even lewd life—greedily[3] clinging to life and afraid of death—as “common feelings of human beings.” their aim being to make real life and their characters subordinate to this “theme.” This is the idealist viewpoint on creative work.

Then there are the so-called “complex feelings.” Revisionists argue that “human feelings are contradictory and that bad persons sometimes have good aspects,” while worker, peasant and soldier heroes “are also influenced by some backward ideas.” They say that “going deep into the inner recesses to uncover these concealed thoughts,” human nature will be “deepened” and the personality of the characters will be “more easily understood.” If writers follow this pattern, then they have no need at all to proceed from different social realities to observe and analyse the different thoughts of men or to concentrate and generalize the essence of different thoughts and feelings of different classes; all they have to do is to depict the “good aspects” of bad persons and the “backward ideas” of heroes, and the personality of the characters will be revealed. This method of typification is actually prettifying the landlords and capitalists and vilifying the workers, peasants and soldiers.

Next, the so-called “influence of human feelings.” Revisionists preach that works of art should use the “human touch” to move and influence people and “unite the people by means of lofty feelings.” Of course literary and art works should move and influence people. But here the question is how? In the Talks, Chairman Mao pointed out that revolutionary literature and art should “awaken the masses, fire them with enthusiasm and impel them to unite and struggle to transform their environment.” The so-called theory of “influence of human feelings” preached by the revisionists eliminates class contradictions and class struggle in literary and art works; instead, it uses the supra-class “conflict of personality” and “struggle of human nature” as the main line for arranging contradictions in their works, and the “influence of human feelings” as the means to resolve contradictions and conflicts.

Marxism holds that, in class society, class relationship is the essence of relationship between men, and of all the complex contradictions, the basic one is class contradiction, while struggles, whatever form they may take, are in the final analysis class struggle. “It is a basic Marxist concept that being determines consciousness, that the objective realities of class struggle and national struggle determine our thoughts and feelings.” Since revisionist writers and artists proceed from supra-class “human feelings” in their creative work, their methods are subjective and idealist and are detached from reality.

So we have two entirely different ways of portraying typical characters. One is proletarian, which proceeds from the theory of classes and uses the dialectical materialist method to portray typical images of heroes; the other is bourgeois, which proceeds from the theory of human nature and uses the subjective idealist method in the “quest for true men.”

Behind the “Artistic Conscience”

Revisionists have generalized the process of their “quest for true men” as writing about “men” from the standpoint of “men.” What they mean is writers must first of all be supra-class “true men” before they can portray images of “true men” having the “nature common to practically all mankind.” They call this “artistic conscience.”

In class society, whatever a writer produces is invariably determined by the world outlook of his own class, and there is no supra-class artist or “artistic conscience.” A revisionist ringleader in China’s literary and art circles once said: “Maybe none of us is a true man now, and we have not completely rid our minds of the opposition between classes.” This actually amounts to saying that if writers want to portray “true men with human nature,” they must try to completely rid their minds of the opposition between classes, cut themselves off from people’s social life and go into artistic “ivory towers” to “cultivate” the so-called “artistic conscience” “loyal to human nature.” So it is clear that the aim of these revisionists is to lead writers and artists astray so that they will betray Marxism-Leninism. 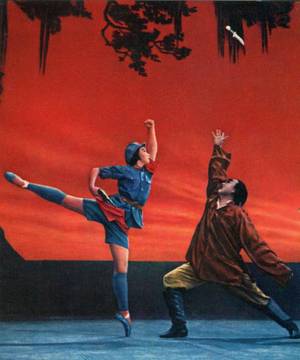 From “The Red Detachment of Women”: Wu Ching-hua kills the depraved criminal and counter-revolutionary chieftain, the Tyrant of the South.

In the Talks, Chairman Mao said: “Works of literature and art, as ideological forms, are products of the reflection in the human brain of the life of a given society. Revolutionary literature and art are the products of the reflection of the life of the people in the brains of revolutionary writers and artists.” If writers follow the revisionists’ “artistic conscience,” they do not have to proceed from objective social life or go into the midst of the masses’ struggles and lives, and they do not have to observe life from the viewpoint of classes and class struggle or use this viewpoint to guide their creative work. The so-called “artistic conscience” reflects exactly the bourgeois world outlook and views on art. It is diametrically opposed to the orientation that literary and art workers should serve proletarian politics and serve the workers, peasants and soldiers. If writers and artists fall into the trap of “artistic con- science,” they will not be able to keep to the proletarian stand and to Party spirit, and consequently they will throw overboard the orientation of serving the workers, peasants and soldiers.

In Manifesto of the Communist Party, Marx and Engels proclaimed that, as regards the Communist revolution: “…its development involves the most radical rupture with traditional ideas.”[4] But opportunists use the theory of human nature to oppose the theory of classes and substitute humanitarianism for communism. The theory of human nature has in fact become the theoretical basis for “Left” or Right opportunist political and literary and art lines of every description.

In the history of our Party, Wang Ming,[5] Liu Shao-chi[6] and other political swindlers invariably played up and pinned their hopes on the theory of human nature while pushing their reactionary political and literary and art lines. In the 1930s, they raved that “in literature and in every field of art, the stress should be on the ‘literature of men.'” They opposed the leadership of the proletariat in the united front and hoisted the capitulationist banner of “national defence literature.” In the 60s, they put forward a series of revisionist ideas on creative work, unfurled the ensign of “literature and art of the whole people,” and advocated “opening up a broad road for depicting the images of ‘men.'” Historical experience tells us that the theory of human nature is very deceptive and its pernicious influence widespread and deep. Only by making the most radical rupture with the bourgeois world outlook and views on art can revolutionary literary and art workers succeed in portraying typical proletarian heroes and make our literature and art different in essence from those of the landlord and capitalist classes and from those revisionist works which ostensibly deal with themes of revolutionary struggles but actually preach the human nature of landlords and capitalists. The history of proletarian literature and art is a history of struggle between the theory of classes and the theory of human nature. It is through the struggle against the reactionary theory of human nature that the portrayal of typical proletarian heroes and heroines in the model revolutionary theatrical works has attained such artistic heights.

[1] In many discussions on Marx’s assertions on the question of human nature, Marx’s comment in Capital, Vol. I, Chapter 24: “Conversion of Surplus-Value into Capital”) is cited as one of his most significant conclusions on the matter: