I recently acquired an unusual piece of ephemera for my collection of Soviet era documents, art and memorabilia. I purchased the item online from a seller in Russia. It was something of an accidental purchase, as I’d mistakenly thought that the picture on the front of the post card was related to Zoya Kosmodemyanskaya. Turns out the only thing this item had to do with Zoya was the cancelled postage stamp on the back and I already have several of those. Nevertheless, it’s an interesting post card in that it features correspondence from the time of the Soviet Union’s Great Patriotic War against Germany, dated seven months after the siege of Leningrad ended. 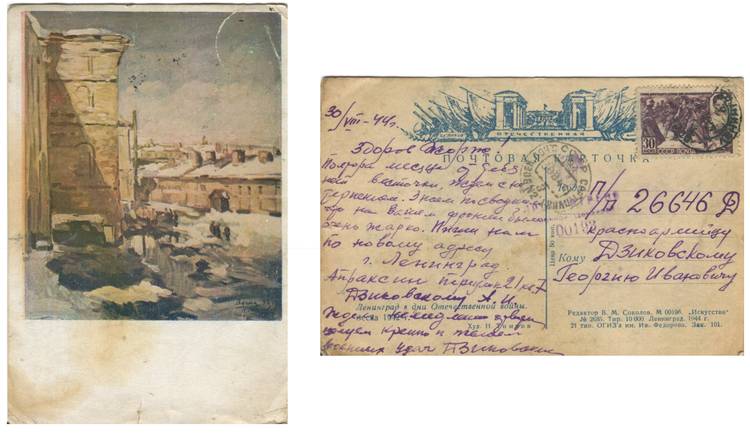 Click on the picture to view a larger image.

The image on the front of the post card is a painting by Nikolai Timkov entitled, “Leningrad in the Days of the Great Patriotic War. Spring 1942.” The building in the picture still stands in at Apraksin pereulok in St. Petersburg. Grover Furr translated the writing on the back.

No news from you for a month and a half, we are impatiently awaiting some. We know from summaries that it has been very hot on your front. Write us at our new address: Leningrad, Apraksin pereulok 21, apt. 7, Dzikovski A.I.
George, [text not legible] an answer  We embrace you strongly and wish you all success. Dzikovskaia

This entry was posted in art and ephemera, Russia, USSR and tagged Grover Furr, Leningrand, USSR. Bookmark the permalink.