Something new for the house

Those who know me well are quite familiar with my penchant for Soviet-era artwork. Over the course of the past decade or so, my burgeoning collection of posters, banners, paintings and sculptures has filled my library room and, probably to my wife’s chagrin, spilled over on to my side of the master bedroom. 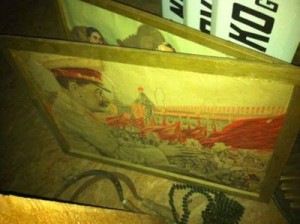 My first glance at a new piece for my collection.

My collecting has introduced me to some well-connected art and antique dealers, including a seller who lives in Vilnius, the capital city of the country that was once the Lithuanian SSR. From time to time, he sends out e-mails to his customers, sharing new finds and special deals. In September of last year, he sent out one batch of e-mails with a series of pictures of a room, basically saying that if anybody saw anything they liked, he’d entertain any reasonable offers. I saw plenty of cool stuff in the photos, for sure. But the thing that really caught my eye was a framed poster that was tucked between a few other vintage items. I asked for more information about the item and the seller sent me the dimensions of the picture along with some additional photos.

As I’d suspected, the item was a poster (or, at the very least, a large piece of one, measuring about 20 in. by 30 in.) featuring one of the most well-known propaganda scenes from the Stalin era. Some research after the fact (including some much-appreciated help from a Russian-speaking associate) revealed that the original, complete poster included the Russian inscription “Beloved Stalin – the People’s Happiness” It was created in 1950 by artist Viktor Borisovich Koretskii. It’s hard to say whether my acquisition-to-be was an original  printing but outward appearances suggested that was a distinct possibility, indeed.

It was quite rough, apparently cropped and mounted in a homemade, hand-painted frame. Despite the appearance of a number of creases, tears, stains and patches, the piece had character and – even if it wasn’t he original version of the poster – it was still very old. In fact, the photos actually suggested a lot of history and character in the piece. After some negotiating, we agreed upon a reasonable price, including the rather expensive shipping costs for this rather large item.

Within a few weeks, a large parcel arrived at my door containing the framed  artwork. It actually took Thomai and me about 30 minutes to unpack it, as the seller had done a quite remarkable job in packaging it for the long trip overseas. True to form, Thomai took one look at the picture once it was completely unwrapped and asked, “Where in the hell are you going to put that?” I assured  her that I’d find a good spot for it.

I inspected it closely and, by and large, it was exactly what I’d expected; a worn and somewhat haggard but striking artifact from another time and place. Unfortunately, my excitement was rather short-lived as my eyes were drawn to one conspicuous spot near the center of the piece. It was a small, rounded tear in one of the red flags in the background. Although there were other tears in the poster that had been patched with tape or rubber cement, this one was especially noticeable as someone had tried to conceal it by using hot pink highlighter. In my mind, this was decidedly different from the other rips and repairs in the picture because it looked so haphazard and so recent.

I was pretty disappointed for a couple of days and at one point, I had even discussed the possibility of a partial refund with the seller. But Thomai wisely suggested I take the picture to a local art shop that specializes in museum-quality restoration. I was a little reluctant to take such a controversial item there, thinking that they were sure to turn me away but to my surprise, the staff there were very understanding and more than happy to take on the project.

After just a few weeks, the artist from the art shop called me to tell me that she’d repaired the issue with the flag, removing the highlighter and color-matching the spot so that it was virtually unnoticeable. She suggested a few other minor repairs, noting that she didn’t want to alter the overall timeworn appearance of the piece. I agreed to the additional repairs and improvements and within another week or so, they called me to pic up the picture. It was kind of funny because when I got there, I found my picture quickly amongst the others in the shop because mine was the only one that was covered up with a large piece of cardboard. I guess they didn’t want people thinking they were into that kind of thing. At any rate, I had the picture back and had only spent a very nominal amount on the repair and restoration of the poster.

It took some creative use of space, a bit of rearranging and a new tabletop easel but the poster is finally on display in a prominent spot in my home library.

At home amidst the kitsch and bric-a-brac.

This entry was posted in art and ephemera, Russia, USSR, zilch and tagged art, gammacloud.org, Stalin. Bookmark the permalink.