Originally written in May 2013 for the website Primary Ignition.

So you think you have an awesome multiverse? How many universes do you have? 52? That’s it? In my day — back in those heady pre-Crisis years — the universe went on forever. Why, you might even say it was infinite. There was Earth-Four, home of the Charlton Comics heroes; Earth-X, where Nazi Germany won World War II; Earth-S, from which Captain Marvel and all of the Fawcett Comics heroes hailed and even Earth-C, stomping grounds of Captain Carrot and his Amazing Zoo Crew. As a longtime DC reader, I was perhaps most familiar with Earth-1, home to the Silver Age incarnations of DC heroes and the site of most Bronze Age storylines. But Earth-Two was my favorite universe. That’s where the glory days of DC comics lived in my mind. The Justice Society, the All-Star Squadron and the original Superman. The real Superman. 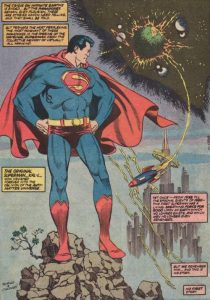 I guess I’m showing my age. Perhaps it all comes down to nostalgia, after all. Superman of Earth-Two — known to some by his Kryptonian name Kal-L to his closest of friends — was warm, wise and prudent. He was like a flawless, nearly omnipotent grandfather. His gray temples and the strangely proportioned “S” logo — markedly different from that of his Earth-One counterpart, Kal El — were charming as distinguishing characteristics. He was like an omnipotent grandfather. There was a “blood and guts” side to him (after all, he did fight in World War II) and a very down to earth practicality in how he spoke, assessed and reacted. Earth-One’s Superman, by comparison, was stilted and overly analytical. In some respects, this made him easy fodder for comic book writers like Frank Miller who, by the mid to late ‘80’s, re-imagined Superman with virtual contempt, portraying him as the ultimate moralistic lapdog, pristine and self-righteous to a disgusting degree (see Miller’s The Dark Night Returns, for example). But that wasn’t my Superman. That wasn’t the way they did things over on Earth-Two.

Indeed, Kal-L, as a battle-tested veteran of countless terrestrial and intergalactic wars, was the guy that everybody went to for advice and support. Even other Supermen went to him in a crunch. But for all of the great stories and adventures, he didn’t really show what he was all about until the end. The end of Earth-Two.

Crisis on Infinite Earths is, for my money, the best comic book miniseries ever. I honestly don’t think it’ll ever be bested, either. Not to me, anyway. Almost half of the comics in my “Top 12” favorites list are direct tie-ins to the Crisis story and I think most of them prominently feature Superman of Earth-2. Crisis was the most significant event in DC Comics history when I was at the pinnacle of my comics reading. To this day, it’s hard to imagine DC or any other comics company putting together such a far-reaching, comprehensive event as Crisis. Sure, many have tried but I don’t think any have succeeded. Crisis was groundbreaking and special for so many reasons. Maybe one of those reasons is that Kal-L played such a decisive role in its premise and its dénouement. 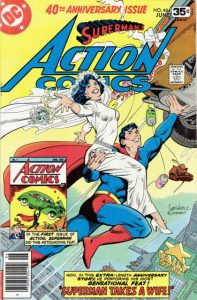 Kal-L was an extremely integral character in the early issues of Crisis but in my mind, he really showed his value in the last two issues of the series. Crisis #11 is really the beginning of the end for Kal-L but at least he was able to sparkle before he faded. The issue is replete with pathos, portraying Superman of Earth-Two as a man without a world. Waking up in the wake of a cataclysmic battle with Anti-Monitor in issue 10, Kal-L quickly comes to realize the horror of the complete consolidation of the infinite multiverse into one universe in which surviving heroes from the old worlds are now obsolete and alone. Kal-L’s wife, the Lois Lane of Earth-Two — they married in Action #484 (1978) — is one of the casualties of DC’s “retcon” and it’s her absence that is understandably Superman’s greatest loss. But it’s a loss with purpose as Lois’s absence of presence drives Superman to meet Earth’s greatest thread head-on.

By Crisis #12, Superman of Earth-Two is the de facto leader of the new Earth’s remaining heroes. A man without a world, Kal-L heads into final battle with the Anti-Monitor with a virtual deathwish. True to the original vision of Siegel and Schuster’s Golden Age Superman, Kal-L is ready to put himself in the direct firing line to save everyone in the universe. And in the final pages of Crisis #12, he does just that, delivering the coup de grace super-punch to Anti-Monitor, ending his threat to humanity (and everyone else in the universe) once and for all…for a while, anyway. Thankfully, there’s a deus ex machina that allows Supers to meet Lois Lane on “the other side” so that the two enjoy some semblance of a happy ending at the end of it all.

DC wasn’t quite done with Kal-L after Crisis. He came back in Infinite Crisis and probably in other stuff after that (I’m not terribly well-versed in comics history after, say 1992, mind you) but some of his best post-Crisis were immediately after the crisis itself in tales in which DC built upon Superman’s early adventures and his origin. Last Days of the Justice Society of America (1986) features Kal-L as a supporting character in his fascist-stomping heyday and Secret Origins #1 (1986) has what is perhaps the best re-telling of Superman’s origin, courtesy of Roy Thomas and Jerry Ordway.

As a concept, Superman is ingrained in popular culture. He’ll be around forever, one way or another and there’s no doubt that writers and artists with try time and again to update and enhance his character in an effort to create a timely, fresh and improved rendition. But the very idea of Superman in all its versions and forms — and the idea of the comic book superhero itself — will always come back to the core components of the original Superman; the one who started it all: Kal-L. And for that reason, he’ll always be greatest Superman of them all.