In most literary and academic circles—excepting those of Soviet-era institutions in the USSR and Eastern bloc countries— it is anathema to level even the slightest criticism against the work of Nobel laureate Alexander Solzhenitsyn. But well-reasoned evaluation of the author’s work provides valuable insight into his motivations and his world view. One of the best examples of this is Alex La Guma’s 1974 essay, “Alexander Solzhenitsyn—Life Through a Crooked Eye,” written for The African Communist, a publication of the South African Communist Party. La Guma, who left his native South Africa in 1966 amidst the omnipresent repression or apartheid, wrote his poignant critique of Solzhenitsyn while in exile (ironically on the eve of Solzhenitsyn’s subsequent deportation from the USSR).

In his article, La Guma noted the curious fact that Solzhenitsyn’s work was readily available throughout South Africa despite the country’s notorious penchant for censorship, especially with regard to the work of writers from the USSR:

Alexander Solzhenitsyn has the distinction…of being the only writer in the Soviet Union, as far as we can remember, to pass South Africa’s racist and anti-communist censorship examination. While the works of progressive authors have been banned in our country, we are told by South African Outlook[1] that “readers of this journal need no introduction to the author of Cancer Ward and The First Circle.[2]

Through discussion and analysis, La Guma concluded that Solzhenitsyn’s decidedly anti-Soviet perspective was implicitly congruent with the ideological foundations of South Africa’s ruling class and their stooges, making the Russian author’s work something of a de facto form of propaganda that endorsed the politics of division and inequality:

Solzhenitsyn’s conception of the world is not one of contending classes, of working class against capitalist exploiter, or imperialism against anti-imperialism, man struggling to create a better life in which his “Art” will have to take sides. No, for him social contradictions stem from the Freudian conception that living beings have an aggressive instinct whose manifestation is natural and inevitable.[3]

Later in 1974, Bruce Young, writing in the Trotskyist journal International Socialism, effectively portrayed Solzhenitsyn’s work as a continuing struggle of contradictory themes, on the one hand championing free will and individual rights while simultaneously extolling the virtues of an external locus of control in which metaphysics and blind obedience are man’s true salvation:

For him the world as God’s creation is essentially harmonious and perfect: any disharmony, imperfection or evil in it is the result of man’s willful interference and fallen nature. This is a recipe for transforming spontaneous revolt into passive, moral protest which is utterly utopian and in practice downright reactionary. If the world’s troubles are due only to human interference with it, then clearly the way to improve things can never be to organise to change it ourselves according to earthly human need and desire. On the contrary we must submit ourselves to God’s heavenly will, as interpreted to us by his authorized representatives on earth – in former days the Tsar’s priests, nowadays presumably Solzhenitsyn himself. This doctrine is not just anti-socialist, it is anti-democratic as well: if people are evil by nature they need an authoritarian order to keep them in check.[4]

Ira Gollobin, writing in his exceptionally exhaustive tome Dialectical Materialism: Its Laws, Categories and Practice, effectively skewers Solzhenitsyn with his own words, exposing Solzhenitsyn’s contempt for science and logic:

Those who want to put history beyond the reach of scientific inquiry declare that it is essentially irrational: “history is like a living tree. And as far as that tree is concern, reason is an axe. You’ll never make it grow by applying reason to it.”[5] 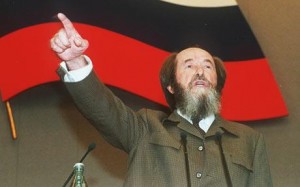 In the above quote, Solzhenitsyn’s disdain for historical materialism bleeds through thin veils of allegory and pessimism, much in the way he’d maligned the very notions of collectivism and realism in other forums and writings. Gollobin, however, provided a laudable rebuke to Solzhenitsyn’s attack on reason:

On the contrary, imperialism’s “growth” — the convulsions, the catastrophe it inflicts on billions of people’s — only can and will be “asked” by those “applying reason to it” — a science of society guiding those billions in extirpated bourgeois society and constructing socialism.[6]

The purported merits of socialism aside, Solzhenitsyn’s most scurrilous assertions and positions were clearly contradictory to most humanitarians and civil libertarians of his era:

Once in America and feted by Western leaders, he urged the US to continue bombing Vietnam. He condemned Amnesty International as too liberal, opposed democracy in Russia, and supported General Franco.[7]

One might conceivably argue that Solzhenitsyn was irrevocably under the influence of American politics and policies by the time he arrived in the U.S. in 1975 but the framework of his personal philosophy were shaped well prior to his deportation from the USSR. Solzhenitsyn was, without question, an unrepentant foe of the Soviet system and its political underpinnings but his alignment with the forces of imperialism and exploitation (and their acolytes) should raise serious questions to who takes the time to look past a carefully crafted and maintained façade of idealistic hero-worship and hagiography perpetuated by the Western press. In full context, Solzhenitsyn seems little more than a gifted writer with a skewed world view, a lofty personal agenda and some powerful admirers.

[1] A magazine published from 1922 to 1996 (officially defunct in 1998), covering news and current events and written purportedly from an “ecumenical Christian” perspective. The magazine was re-launched in 1999 as New South African Outlook.

[4] From “Solzhenitsyn: The Politics of Isolation” by Bruce Young, printed in International Socialism, No.72, October 1974, pp. 25-28. Full text online at marxists.org.

[7] “A reactionary called Solzhenitsyn,” by Mark Steel, published by The Independent (UK), 6 August 2008.