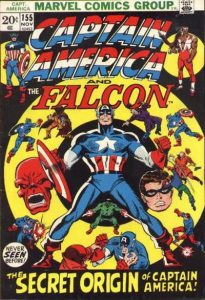 It was one of those great, serendipitous days that young comic book collectors dream about. I was 14 and on summer break. I didn’t have much of a social life back then and one of my favorite spots was a used bookshop that was not far from my house. About once a month, I’d visit the shop to load up on cheap paperback books and pick up a few random comics from the rusty old spin rack in the back corner of the store.

On the particular day in question, I checked the rack but didn’t find anything exciting. I wandered over to the Horror paperbacks and picked up a book or two before noticing a stray stack of comics sitting atop a pile of books. It was a collection of Captain America and Falcon issues from 1971-1973. I asked the store owner how much she wanted for them, figuring she’d charge a mint…after all, these things were old – older than me, even! I think I walked out of there with the whole lot under $2.00. ‘Twas a real bargain back in those days. There was some great stuff in those comics, including a throwdown or two with the forces of Hydra as well as some other appearances from classic Cap villains.

But the standout in the batch was Captain America #155 which featured a story entitled “The Incredible Origin of the Other Captain America!”  This issue was actually part three of a four issue plot scripted by Steve Englehart. I was fortunate to pick up on the yarn right as the action kicked in. 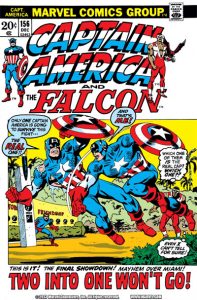 This issue pits the original Captain America, Steve Rogers, against his little-known replacement William Burnside. Courtesy of a flashback from Young Men Comics #24 (December 1953), it is revealed that Burnside donned ol’ Winghead’s outfit while Rogers was out of commission in the years following World War II. In his heyday, he was billed as “America’s Savior” as he carried forth the mantle of 1950’s America. He was joined by a young protégé who would ultimately become the 1950’s incarnation of Bucky. Together, these resurrected and reinvented heroes fought the “good fight” against a rogues’ gallery of foreign and ideological foes.

This story is a retcon before retconning was cool. The jingoism and paranoia of the Red Scare, coupled with an apparently unstable variation of the Super Soldier serum would ultimately wreak destruction on the psyches and souls of the 1950’s “Sentinels of Liberty.” Burnside – believing that the “real” Captain America perished in a battle with Baron Zemo at the end of World War Two – regards the “1970’s” Cap as a hippie imposer and communist sympathizer and swears to eradicate Rogers and his comrades-in-arms, SHIELD operative Sharon Carter and winged warrior The Falcon.

The ensuing battles between past and (then) present Captains America spills over into issue #156 which – in the pre eBay world – took me some years to find. The Falcon and Sharon Carter tackle a battle-crazed and rabid Bucky as the Captains stage their showdown at the site of the “Torch of Friendship” in Miami, Florida. It’s a slugfest, for sure.  But in the end, the real McCoy wins the day. 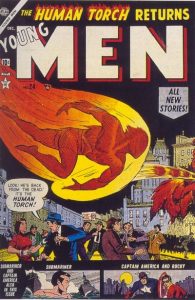 Following the battle, Steve Rogers is less than jubilant as he contemplates his victory.  Thinking aloud, he wonders his defeated doppelgänger – a shell of a man consumed with racism, xenophobia and ultra-nationalist fervor – doesn’t really represent a small part of him as well. Moreover, Cap is left to ponder what he himself may have become had the events in his life unfolded much differently.

Captain America #155 and 156 are a terrific example of how popular culture can accurately capture and subsequently reflect the zeitgeist. By late 1972, America had endured the hysteria of McCarthyism, the horrors of Vietnam, the omnipresent possibility of Mutually Assured Destruction, and the evolution of a revolutionary counterculture. Moreover, the tumultuous scandal of Watergate was in its early stages and before long, Americans would begin to see matters regarding leadership and power in a completely new light. These books depict Captain America – and America itself – at a true crossroads in history. It’s the atypical poignancy of the underlying story which makes these issues hidden gems.