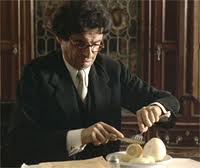 Zinoviev seriously gets his chow on.

Originally posted 04 May 2010 on greeklish.org

Last week, I was finishing up some steaks on our charcoal grill when it occurred to me that it would be nice to supplement them with something.  I have a small metal pot that’s designed for use on grills (almost like camping gear) and I usually use it to heat barbecue sauce or baked beans.  But I didn’t have either of those things that night, so I thought maybe it would be a good idea to heat up some onions in the pan.  While I was in the kitchen cutting them up, I figured I’d get creative and season the slices up a bit.

As I looked for ingredients to add to the pot, my mind turned to the scene in the film Reds in which Gregory Zinoviev is eating a mixture of onions and lemons as he explains to John Reed that the mixture fends off scurvy:

Zinoviev:  Speak English.  Have a lemon.  You won’t see one for a long time.
Reed:  Thank you.  I just want to know if you think that I was clear in what I said about…
Zinoviev: Eminently clear.  Salt?
Reed:  Salt?
Zinoviev:  For the lemon.
Reed:  Uh, thank you…I see you eat the peel with the lemon.
Zinoviev:  Fights the scurvy.  So does the onion.  Together, they fight better.
(Yeah, this is exactly the kind of thing that runs through my mind all day and all night, no lie…)

I’ve been using lemon as a stir-fry ingredient ever since I got the idea from reading a pseudo-biography about Mao Zedong some years ago and seeing as how onions are a standard when it comes to steak toppings (and the treatment of scurvy, apparently), it seemed fitting to combine them for this experiment.

I grabbed my pot and tossed the onions and steak into it but I figured that there needed to be some other “medium” in the mix so that I wasn’t simply heating the ingredients.  Margarine seemed like a good enough idea but instead of going easy with it, I ended up heaping a healthy dose into the pot so that I’d end up with something of a sauté.  I also added a few spices for an extra zip and heated the pot out on the grill for a while before serving it with dinner.  (The next time I do this, I’ll probably use a little less margarine and more spice, salt and pepper but I won’t corrupt the flavor of the onions and lemons by adding any kind of sauce or herbs.)

I think Thomai (who has a passionate dislike for Zinoviev based solely on how he is depicted in Reds) was as pleasantly surprised with the results as I was.  Rather than covering the steak with the topping, we covered each individual bite with a little onion and a little lemon and it all was quite tasty.  At one point I commented that it didn’t seem healthy to cover steak with margarine but Thomai said it wasn’t the worst thing you could eat.  Hey, at least we’ll be scurvy free! 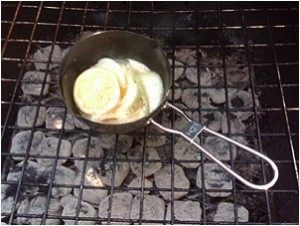 Directions:  Skin and chop 1 onion.  Slice 1 lemon.  Combine ingredients in a pot with butter, cayenne pepper and salt & pepper (to taste).  Place over high heat for 10 minutes, stirring occasionally.  For best results, serve in pot to retain heat.  Use as topping for cooked steak or pork, combining lemon (pulp and/or peel) and onion with meat in each and every bite.

This entry was posted in and so on..., marxism and tagged cooking, Gregory Zinoviev, John Reed, Mao, Reds, scurvy. Bookmark the permalink.