Last week, I was doing a bit of tidying in my home library and I came across a big stack of copies of The Economist  from late 2001 and 2002.  I had a subscription to the magazine back then and read the issues with some interest, holding on to them as I thought they might be useful at some point in the future.  However, since they had done little more but gathered dust for the past 5 years, it seemed like a good time to get rid of them.  But before I pitched them all, I did recall that there was one article in the batch of 50+ issues that was worth keeping.  The article was an October 27, 2001 obituary for Chang Hsueh-liang (Pinyin spelling: Zhang Xueliang), who was – in my opinion – one of the most intriguing figures in China’s modern history.  I clipped the obituary before walking the pile of old magazines to the recycling bin. 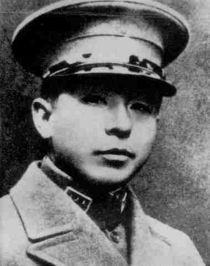 It was Chang Hsueh-liang, known to many as “Young Marshal,”  who temporarily quelled the Chinese Civil War of the 1930’s by unifying the reactionary Kuomintang (KMT) with China’s communist forces against the invaders from Imperial Japan.  His intervention occurred at a point in time in which such a united front seemed impossible.  As the story goes, following some discussion with Chou En lai (Zhou Enlai), Chang engineered the arrest of KMT Generalissimo Chiang Kai-shek and compelled him (ostensibly under a bit of duress) to join forces with the Red Army in an effort to smash the invaders from Imperial Japan.  This incident is known as the Xi’an incident (or Sian incident).  According to the piece in The Economist, Chang opened his meeting with Chiang Kai-shek with the simple words “Please don’t be angry…I wish to lay my views before your excellency.”  Upon agreeing to Chang’s terms, Chiang Kai-shek was released, returning to the helm of the KMT. Chiang Kai-shek was surprisingly true to his word upon regaining his freedom and the united front of the Nationalist KMT and Red Army did indeed win the day in the struggle against the Japanese invaders.  It is widely believed that the Chinese forces could not have repelled the Japanese on their own without the intervention of Chang Hsueh-liang. 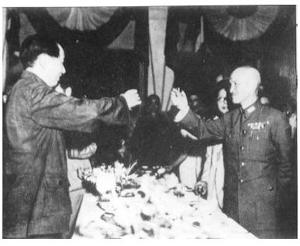 One Night Only: Mao Zedong with Chiang Kai-shek (1945)

Interestingly enough, it is Chang’s upbringing as the son of a prominent Manchurian warlord that made something of a unique ally for the communist forces.  Chang received a private education and military training from the KMT in his early life.  He had something of an appreciation for westerners and a penchant for western luxuries and it was these qualities which made him an unlikely “communist.”  Nevertheless, Chang effectively saw past differences of philosophy and theory in his efforts to combat one the greatest threat the developing nation had ever faced.

Unfortunately, Chang ultimately spent most of his life in prison for his role in the arrest of Chiang Kai-shek.  He voluntarily appeared before a KMT court following Chiang’s release and was placed on house arrest.  When the KMT fell to the communists in 1949, Chang Hsueh-liang was taken to Taiwan by the KMT and he remained imprisoned there through Chiang Kai-shek’s death in 1975 and through Taiwan’s “democratic” reforms in the late 1980s.  It was not until 1990 that he was finally freed.  In 1995, he moved to Hawaii where he spent the remainder of his life.

Chang Hsueh-liang, the “Young Marshal,” is remembered to this day as a hero of the Chinese people.  His bold pragmatism is an enduring example to  those who oppose fascism and imperialism around the globe.