An afternoon with Cornel West 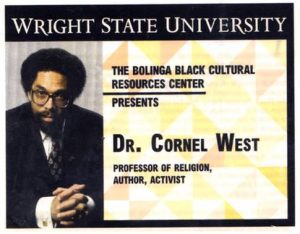 On January 26, 2006, I had the honor of seeing Dr. Cornel West speak at my alma mater, Wright State University. The speaking engagement was not scheduled to begin until 3:00 that afternoon, but I arrived at the WSU campus extra early to attend to some personal business. After a few quick stops around campus, I stopped by the bookstore to buy a pen, as I had realized I neglected to pack one and I was almost certain that I would want to take some notes during Dr. West’s presentation. I then made my way across campus to the Medical Sciences Auditorium where the engagement was to be held, passing through the familiar halls that held many memories from my years as an undergraduate and graduate student.

When I got to the Medical Sciences building, I found that the auditorium (which I think seats around 400 to 500 people) was almost completely empty. I quickly grabbed a front row seat and thought to myself, “Wow…I got here just in time!” Then I looked at the clock and saw that it was 1:40 and my next thought was “Now how am I going to pass the time for the next hour and a half?” I am currently reading Neil Simpson’s “Macedonia: Its Disputed History” but I had neglected to bring it with me. Luckily, I had my copy of The Portable Karl Marx (edited by Eugene Kamenka), so I spent the better part of the next 30 or 40 minutes reading selections from that volume.

I had the foresight to pack a few other items and they both came in handy later in the day. I usually don’t ask for autographs and the like, but I decided to take my copy of Race Matters along with me just in case Dr. West was up for some book signing after his presentation. I also brought my digital camera, just in case photography was permitted in the auditorium. 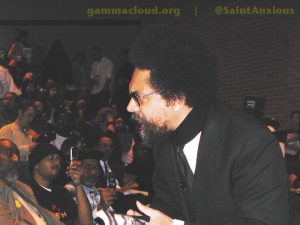 Around 3:00, things got underway. By this time, the auditorium was packed and people were standing against every wall and sitting wherever there was empty floor space. Dr. West arrived with a group of folks at the left entrance of the front of the auditorium. It was very exciting to see him and I could feel a palpable intensity in the air as I watched Dr. West greet university staff, faculty and other attendees. I snapped a few pictures while I watched him chat with people. To make the situation even more surreal, comedian Dave Chappelle entered the auditorium from the other side a few minutes later. Dr. West and Mr. Chappelle exchanged a few words and an embrace and Mr. Chappelle then found a seat on the floor near the front of the auditorium. Dave Chappelle is a resident of Yellow Springs, Ohio and his mother, Dr. Yvonne Seon, is the founder of WSU’s Bolinga Black Cultural Resources Center.

Dr. West opened his presentation by offering this quote from Socrates: “The unexamined life is not worth living.” The task for us, he explained, was to “exemplify the courageous Socratic question” and make life something that is most assuredly worth living…A life that is measured by individual magnanimity and collective consciousness — as opposed to the the market-driven society’s emphasis on individual consumption and the importance of material possessions. Dr. West told us that the worst thing parents can say to their children is: “Be successful.” He discussed the difference between one who is “successful” and one who is “great,” adding that it is often the case that those who are “successful” are rarely “great” and vice versa.

At one point in his lecture, Dr. West stated that he believes women will lead the way in the next phase of social change. I reflected on this for a while as he talked and my thoughts led me to my own daughters. I took out a piece of scratch paper and jotted down a note and stuck it in my copy of Race Matters, hoping that I would have a chance to share it with Dr. West later in the afternoon.

Dr. West’s presentation ran somewhere around 60 to 75 minutes. His lecture featured a valuable overview of struggle and redemption in American history with emphasis on integral figures such as Emmitt Till, Medgar Evers, and Sojourner Truth. He discussed his personal interactions with individuals such as Afeni Shakur, Ralph Nader and Hugo Chavez. He also offered an unflinching critique of American pop culture, outlining the many problems of our Constantinian culture and our unending drive to possess and consume. There aren’t many places in today’s America in which the progressive movement can find such a focused, coherent and determined voice as that of Dr. Cornel West. 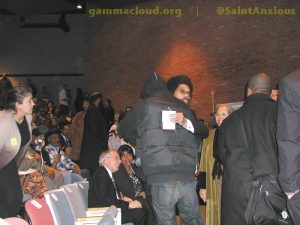 The lecture ended with a short question and answer session. A reception was to be held across campus and I headed that way in hopes of getting a moment to talk with Dr. West. I waited in the reception hall for a while while many of the other lecture attendees filed in and talked amongst themselves about Dr. West’s presentation. Dave Chapelle made his way to the reception as well and he mingled a bit with the rest of the crowd while everyone awaited Dr. West’s arrival.

Some time later, Dr. West emerged from a back door of the Bolinga offices. There was a small throng of people around him and I waited patiently to get a few seconds of his time. When my turn finally came, I asked him if he would write an inscription in my copy of his book. He said he would and took the book from my hands, opened it and asked for my name. I explained to him that I wanted to give the book to my daughters and I showed him the note I had written earlier in the afternoon. The note was simply the first names of both of my daughters. Dr. West happily wrote the following inscription on the title page of the book:

We shook hands and spoke just a few more seconds before he turned to the next admirer. It was almost 6:00 by this point and I figured it was time to head home. It was pretty difficult to calm down after such an exciting afternoon. On the way to my car, I stopped and sat down to reflect a bit on my experiences from that afternoon. My heart was beating fast and I was still a little short of breath from the thrill of hearing Dr. West speak and being able to interact with him, even if only for a fleeting moment. I can honestly say that there are few times in my life in which I have felt star struck, but this was one of them for sure. It wasn’t so much that I had been able to shake the hand of a famous person and get an autograph as it was the realization that I had been in the presence of greatness.