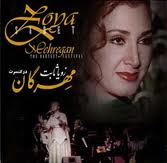 It’s been a little while now since I became acquainted with the music of Zoya Sabet.  I don’t really know how long it’s been, but I do remember what I was doing when I first discovered her music…At the time I was searching for an alternate version of Shostakovich’s music from the film “Zoya” (Some versions of op. 64 include a vocal arrangement in the “Adagio” portion of this particular work).  As I searched and searched, the name “Zoya Sabet” kept popping up in my search results. With the help of Google, I did a little reading on Ms.Sabet and I learned that she is a very accomplished performer of classical Persian music and that she has performed abroad for a number of years, accumulating a very respectable body of work. I enjoy corresponding with a few Iranian friends from time to time, but we mostly discuss Iranian politics and I know little about Iran with respect to its art or culture.  With my curiosity piqued, I listened to a few tracks by Zoya Sabet that were readily available over the Internet and despite the fact that I do not understand Persian, I found the music and vocals to be absolutely amazing.  I enjoy a fair amount of Greek and Indian music and while classical Persian has some similarities to these styles, it is very compelling and hypnotic in its own right.  For those of us who grew up listening Led Zeppelin, it is very interesting to experience some of the music that served as a profound influence over some of Zeppelin’s more intricate works.

Over the course of a few months, I accumulated a small sampling of songs by Ms. Sabet and I listened to them over and over again for quite a while.  I checked with  some of the larger Internet sellers to try and order some full-length CDs, but I found that  neither of them carry works by Ms. Sabet. So last week I ordered Zoya Sabet’s Mehregan Concert: The Harvest Festival on CD from an Iranian/Persian music specialty store.  I received the disc in the mail last night and I have listened to it 4 or 5 times already.  I had already heard a few tracks on the album, but it is an altogether different experience to hear the entire presentation.  Most of the writing on the CD is in Persian but there are a few notes in English on the back:

Mehregan: The Harvest Festival
A tribute to knowledge through festival of friendship and music

This album features a harvest of songs featuring the most memorable and well-known Iranian Poets and composers of the past fifty years.  This retrospective honors those creators through the voice of Zoya Sabet.

Perhaps I can persuade some of my Iranian friends to share a little insight on the lyrics of these songs and the stories behind them.  But even if the lyrical content remains a mystery to me, I will still enjoy the music immensely. 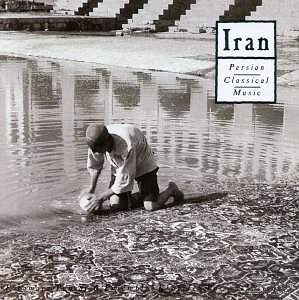 Although Ms. Sabet’s work is a bit difficult to come by, a CD entitled Iran – Classical Persian Music is widely available in the US (it’s even listed on Amazon.com).  I purchased this CD a few months ago and I have been quite happy with it.  A few of the tracks feature vocals by a very famous Iranian vocalist named Khatereh Parvaneh. Shortly after I found this CD, I found an article by Najmeh Fakhraie in which she describes a 2001 performance by Khatereh Parvaneh.  The story describes Ms. Parvaneh’s descent into virtual obscurity following the rise of Political Islam in Iran.  The story also recounts one of the only performances by Khatereh Parvaneh in recent years, noting that the performance was in relative seclusion and the the audience was composed of women only, which is a requirement under the law:

I’ve seen showers that only women can use, salons that only women can go to and I’ve even heard of a hospital for females alone when those crazy goats in parliament were talking of starting one. But this one I had not even dreamed of: a concert performed and attended only by females. It sounded too bizarre to be real. “Do they ask the guys standing outside to cover their ears?” I ask a friend.

The staff there, who are always males wearing light green, have given way to females for this exclusive performance. There is not a man in sight. I feel like I’ve stepped on another planet and I know I don’t like the change.

Once inside the main hall, things are even more different. A concert I had planned to attend looks more like a fashion show. “This is sick,” I tell myself a million times. And I wonder what has brought these people all the way here today. The chance to show off their wardrobe and pretty hair? Boredom? The love of music?

But when the singer comes on stage looking older and more wrinkled up than her pictures, when she opens those lips to let out that heavenly voice that has been bottled up for two decades, and I see the tears rolling down the face of the old lady sitting beside me with that awful tank top, I know that none of those reasons would be complete.

Khatereh Parvaneh sounds as beautiful as she did when she first stepped on stage more than 30 years ago. Bringing to life Parvaneh’s memory better than anyone on earth. I am not an eyewitness, but I have all of my grandfather’s tapes and records that clearly tell me that. [full article]

It is unfortunate that more recent examples of Khatereh Parvaneh’s work are not readily available outside Iran, but the “Classical Persian Music” CD is a stirring example of Khatereh Parvaneh in her heyday.  As recently as last year, Ms. Parvaneh was still performing, although the work of female artists is still under the heavy constraints of government regulation.  But it would seem that Khatereh Parvaneh is not one to go along quietly. Parvaneh publicly criticized restrictions on performances by women in 2005:

The festival is making progress each year, but, women singers have always faced limitations in timing the concerts at the event, she said.

She told ILNA that women perform at the festival, but, the time of the performance is too short for the singer to communicate with the audience and understand what they expect from the artists.

She said that only one day has been allocated for three women’s musical groups in the festival and this is not sufficient for the program. “Both the singers and the audience are dissatisfied with the time constraints at the festival,” she complained.

She appealed to the organizers of the festival to review their policies towards women singers and deal with them as they do with the male vocalists. [full article] 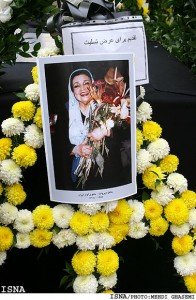