To Be the Heel: Ox Baker

Originally published via The Wrestling Daily in late 2009; republished to mark the passing of Ox Baker on October 20, 2014. 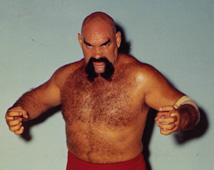 If there was ever a man who is truly the “total package” of a wrestling heel, it’s the legendary Ox Baker.  In his prime, Baker was a giant among the wrestling world’s coterie of ne’er-do-wells, combining an intimidating physical appearance with earth-shaking mic skills.  To be sure, it was Ox’s look that went a long way towards establishing him as a man to be feared.  Sure, he didn’t have that Muscle & Fitness physique but in Ox’s heyday there was more to a wrestler’s physical appearance than pulsating pecs and washerboard-style abs.

In a way, one might well imagine that if The Devil himself was a pro wrestler, he’d look and sound a lot like Ox:  a giant of a man covered in body hair and sporting a shaved head, pointed eyebrows and an overgrown horseshoe mustache.  Standing almost six and a half feet tall and weighing in at over 300 pounds, he towered over many of his opponents, his demonic countenance wrenched in a perpetual sneer.  All that was missing was a set of cloven hooves, really. His promo work was pure hellfire and brimstone, broadcast with a voice that sounded something like a blender full of gravel and glass.

Ox was a big wheel in the WWA, AWA and NWA promotions, wrestling in singles matches as well with tag team partners were themselves future legends, such as Ole Anderson and Billy Graham. As early as 1969, he sported NWA championship gold but his career-defining moment would come a few years later.

The story goes that in 1970, after suffering the wrath of Ox’s infamous “heart punch” during an AWA Midwest Tag-Team Title match in Omaha, Nebraska, wrestler Alberto Torres collapsed in the ring. He was rushed to a hospital where he died, ostensibly due to injuries sustained in the match. Kind of. In reality, Torres had a preexisting medical condition – a ruptured pancreas – and he failed to disclose this to the promoters or his opponents prior to the match. Whatever the case, “kayfabe” ruled the day back in the early 1970’s and the fans were absolutely convinced that Torres had fallen to Baker’s heart punch and nothing else. For better or worse, Baker and the rest of the wrestling world ran with the angle and the incident established Ox as a formidable force within the squared circle and beyond.

In 1975, reality and kayfabe collided again when wrestler and Georgia Championship Wresling co-owner Ray Gunkel perished after sustaining a heart punch from Ox Baker. Baker’s official web site claims that Gunkel died in the ring “before he hit the floor” but other accounts indicate Gunkel won the “Texas Death Match” and died later that night. Gunkel reportedly suffered from arteriosclerosis and in this instance, it is possible that the rigors of the match – including the heart punch – might have been a factor in his demise.

Baker used the hype and hysteria around the wrestling-related deaths to his advantage, crafting his fearsome reputation with his smack-talking skills and menacing physical appearance into a heel identity like none other. He continued to work the heart punch as the most dangerous weapon in his arsenal throughout a number of promotions and territories including Angelo Poffo’s “outlaw” International Championship Wrestling promotion in the early 1980s. In typical over-the-top-heel form, Baker gave a ringside interview to ICW’s Tim Tyler about the fury of his heart punch, including a reference to a St. Louis meeting with Ernie Lad who himself fell victim to the power of the heart punch:

You know, a lot of times when a new man comes into an area…people go, “Oh yeah, it’s another big loudmouth, he’s gonna tell how tough he is, how many people that he’s beat up.”  Well, Ox Baker has never had to do that because when I go to an area, people know that there’s a tough human being there.  Three hundred and eighteen pounds.  Here’s a man over here getting himself into shape because sooner or later he knows he’s gotta get into the squared circle with Ox Baker.  At the bus station, there’s wrestlers takin’ bus tickets out of town.  There’s a lot of wrestlers you won’t see around here any more because they know that they’ll have to wrestle Ox Baker.  Now I have a reputation, I’ve beat men up from coast to coast, all over the world.  I do not brag to tell you how tough I am, I do not tell you I’m the world’s greatest wrestler.  I have one weapon, one thing that puts me above everybody else:  I have a fist here that knows that if you’re not in fantastic shape, that if you haven’t worked out — even a couple of guys have joined a spa around here — because they know they’d better be in shape because if I see ‘em huffin’ and puffin’ in that ring because when I raise that heart punch up in all the fury in my body, if I don’t like you, I drive it into your…

Here!  Here’s a man who had a great reputation, the great Ernie Ladd!  He could beat a lot of guys up.  I got in the ring with him, I pounded him in the heart, he said “Please Mr. Ox, don’t hit me again!” but he’d called me a lot of names…”Walrus face,” things like that…See the punishment?  He’s down on one knee, he doesn’t want to give up, he wished he’d worked out, he wished he had stayed home.  Now he’s on the ground.  You know, it takes…Anybody can kick somebody when they’re standing up, but it takes a great wrestler like me to punch somebody when they’re laying flat on their back. Ernie Ladd, I don’t think that people will see you around here any more.  I don’t think after the punishment that I…Look at that…I am there pounding on that heart because this man did not deserve to be in the same class — he’s not in the same class — as Ox Baker! …Look at that, layin’ there…The people are getting mad and getting worked up because people can see he’s not moving.  Blood is coming out of his mouth, he’s hurt and hurt bad.  That’s the reason.  If you lip off to Ox Baker, if you say he’s not a great wrestler…I don’t care if you don’t like me.  Don’t bring your mother up in a wheelchair and ask for an autograph.  Don’t bring your son around and try to say hello to me.  I’m not here to talk to people!  I’m not here to be a nice guy!  There’s a lot of nice guys, go out and meet them!  Don’t try to come up to Ox Baker and tell me anything!

True to form, defiant, irreverent and controversial; Ox Baker was all those things and more during the course of his wild career. His appearances with the ICW promotion may have been among the less remarkable times of his career, but there were certainly some gems in his time there. He knew how to make his promo spots personal, not just by tearing down his rivals but also by hyping his own exploits and misadventures, whether they were personal or professional. Teasing a rivalry with a young, up-and-coming ICW Heavyweight Champion Randy Savage, he snarled:

Now Randy Savage, I want that belt.  It’s just like when I was a kid and the kids in the neighborhood had bubblegum and candy, I used to smack them in the mouths and take it away from them! (studio audience gasps)  That’s the way I’ve always done things.  If you’ve got something that Ox Baker wants, I’m going to take it away from you.  Now Randy Savage, don’t hide at home with your mother doing the dishes.  Don’t go somewhere and say that you don’t want to wrestle Ox Baker.  Somewhere, some time, whether you are a man or a coward Randy Savage, you have to get in there with the wrestling machine — this deadly heart punch that’s beat so many people up — you will have to put your World Heavyweight belt up against Ox Baker.

That particular angle never came to pass as Baker ultimately swerved into a barn-burning feud with Ronnie Garvin. Baker’s clashes with Garvin were epic in their own right including a memorable incident in which Ronnie smashed Baker’s dentures in the middle of a ring after they had become dislodged during a fight. Baker also used his “star power” to introduce another monster heel in the mysteriously terrifying freak known as Ratamyas. Ratamyas ate fire, vomited a corrosive green fluid into the eyes of his rivals and carved up the faces of his opponents with a mysterious “foreign object.” Ox Baker and Ratamyas were truly a match made in Hell. 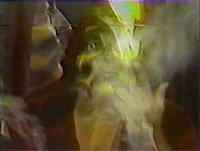 One of the first glimpses of Ox Baker’s malevolent associate, Ratamyas.

Ox saw much of his success while wrestling for the NWA, feuding with The Sheik, Harley Race and Bruiser Brody. Baker worked in AWA in the 1970s and again in the 1980s, teaming with the likes of The Russian Brute to again take aim at his old ICW nemesis Ronnie Garvin. The Russian Brute was personally trained by Ox at Ox’s own wrestling school.

Baker never managed to hit the big time in WWE or any of its older incarnations (WWF and WWWF). But his offbeat physical appearance and unique charisma took him many places including an appearance on TV’s The Price Is Right in 1981 and a role in John Carpenter’s science fiction cult-classic “Escape from New York” the same year.

Ox retired from wrestling in 1988 and took advantage of his hard-earned down time to produce a number of projects including a children’s coloring book and a wrestling-themed cookbook. He makes occasional public appearances to share reminiscences and insight regarding the world of pro wrestling and he’s also worked short gigs with the Combat Zone (CZW) and Ring of Honor promotions.

There are few wrestlers who have enjoyed the spotlight in the way that Ox Baker has. His reputation as a monster heel amounted to an uncanny level of infamy that followed him at every turn for the better part of his career. It would be tempting for an aspiring wrestler to emulate him but virtually impossible to do so with the results that Ox found through his decades of work in the industry.   There are few like him to be sure, and there are probably a lot of babyfaces who are grateful for that very fact.

Mike Bessler is a co-founder of The Wrestling Daily. His daring life of crime made him a legend in his time east and west of the Rio Grande.

This entry was posted in and so on..., professional wrestling and tagged ICW, Ox Baker, Poffo, Ratamyas, The Wrestling Daily. Bookmark the permalink.