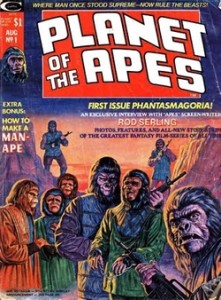 While shopping at a local vintage toy shop last week, I happened upon the first issue of Marvel’s Planet of the Apes magazine from way back in 1974. It was somewhat tattered and obviously well-read but I still thought that the $5.00 asking price was more than fair. It’s a great read even now, full of original material including comic stories and articles. The interview entitled “Rod Serling Recalls” is probably my favorite piece in the issue, as it not only discusses Serling’s work in writing the screenplay for Planet of the Apes, but also touches on some of his  lesser-known projects, including the 1973 American television version of the documentary Chariots of the Gods. Erich von Däniken’s book Chariots of the Gods?, which was the basis for the documentary, was one of my favorite books as a kid and I was interested to know Serling’s opinion on von Däniken’s research and assertions. Here’s the relevant excerpt:

Did Rod have any thoughts about the theories expressed in Erich von Däniken’s controversial bestseller Chariots of the Gods? (Serling did the narration for the TV version.) “I believe much of it. Some of it I will take in a neutral fashion. I’ll say, ‘I’m not sure you’re right. But somebody else give me something else by way of a projection.’ I feel much of what he said can be put to scientific test and found pretty valid!

“The most negative reaction has come from theologians! They hate it. Because obviously everything von Däniken suggests by way of theory — evolutionary and otherwise — goes very much against the New Testament. So when you read a book like Crash Go the Chariots, which was supposed to be the definitive knockdown of the von Däniken book, you look at the critic’s credits! He’s written nothing but theological books. What he’s defending is the Mother Church. So his rebuttal to von Däniken is subject to considerable thought and second-guessing.”

This entry was posted in and so on..., books, science-fiction and tagged Chariots of the Gods, Erich von Däniken, Planet of the Apes, Rod Serling. Bookmark the permalink.