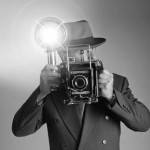 This is what it was like back when
cameras were far less complicated.

“I wish I had a camera,” said my father-in-law as he sat behind me in the minivan.

“What do you want to take a picture of?” I asked.

“The baby,” he said. “He took the bottle from me and he’s drinking by himself. He’s also wearing my hat!”

I glanced back and saw my father-in-law laughing at the sight of his seven-month old grandson wearing the International Harvester hat that we bought for my father-in-law when he retired from the plant somewhere around a decade ago.

As luck would have it, I did have a camera with me at the time as I was carrying my iPhone. Now, my father-in-law typically hates all digital devices and he’s made no secret that he wants to gather them all up and throw them down a well. But when I gingerly offered my phone to him so he could snap the picture, he was all for it. Of course, there was a significant problem to overcome in that he’d never actually used an iPhone before—not to place a call and certainly not to take a photo. But he wanted so badly to take the picture himself that I decided it was high time to show him how to do it…even if I was driving along at 40 miles per hour down a busy thoroughfare smack in the middle of the lunch rush.

“Just point it at Dimitri and press the white button on the screen,” I said.

The instructions were more or less intuitive from my perspective but after a few seconds of almost complete silence, I stole a quick look to see my father in law making his best efforts to follow my instructions. The problem was that he had the phone completely turned around and was preparing to snap a picture of himself instead of little Dimitri. Imagine…his first picture ever with a digital device would have been a selfie!

Once we were stopped at a light, I took the phone and demonstrated things a little more clearly before handing it back to him. A short time later, he passed the phone to me and said, “See if I got anything good.”

When I had the chance, I checked the photos and found he’d taken about 10 pictures of Dimitri and they were all exceptionally cute. Here’s the best one from the batch:

Not bad at all for someone who typically tries to use his cordless phone to change the television channel. We’ll keep at it. 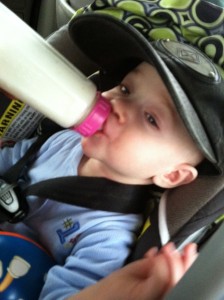 This entry was posted in fatherhood, Society of the Seasons and tagged father-in-law, fatherhood. Bookmark the permalink.