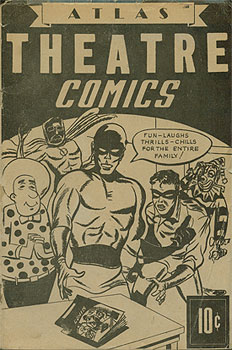 Whenever I visit a comic shop, I am always sure to check out the big glass display case (pretty much any comic store worth its salt has one), keeping an eye out for affordable and unusual items. Back in late 2006, I was at a now-defunct comic shop in East Dayton and I spotted a particularly eye-catching comic book in the store’s special case. It was a rather old-looking book called Atlas Theatre Comics. I quickly found it to be one of those things that I didn’t know I wanted until I realized it existed.

I asked the proprietor what the story was on the book and he got it out of the case so I could have a closer look. He explained that he had picked it up at a recent comic show as part of a larger collection of old stuff. He didn’t have a lot of information on it, adding that it was not listed in the Overstreet price guide. He also told me he’d decided on a $50.00 asking price for the issue after talking to some “old timers” at a comic show.

The cover of the comic was an all-black illustration on an off-white background depicting a handful of “knock-offs” of Golden Age characters, including Plastic Man’s sidekick Woozy Winks, The Red Tornado, and a character that looks like either the Sandman or maybe Air Wave. Once the comic was out of its bag, I perused it, noting that there were ads for local businesses on the insides of the front and back covers and on the back as well. Curiously, the cover itself was more like card stock than paper and it extended just past the pages all around the book. My first glance didn’t yield any big-name characters and at the top of each page, the words “Triple Threat Comics” appeared. I thought it was kind of interesting but figured I’d pass on it. After mulling it over for a few hours though, I decided it was too unusual to pass up and I called and asked them to hold it for me. I then picked it up a short time later. 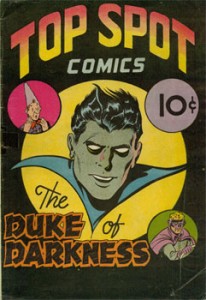 After a thorough read, I found the comic book to be a great collection of obscure Golden Age material. I was especially surprised to see a tale featuring a character called The Duke of Darkness, who I recognized from another Golden Age book in my collection, Top Spot Comics #1. I got a copy of Top Spot #1 in the late ‘80s or early ‘90s at a different defunct Dayton-area comic shop called The Bookie Parlor (when they were at the old Wayne Avenue location).  I eventually confirmed that the Atlas Theatre issue in my possession was indeed a copy of Triple Threat Comics #1 after I purchased a copy of that same comic book (with the original cover intact) at a local comic con. Both Top Spot and Triple Threat were published in 1945. Oddly enough, Triple Threat was published by a company called Special Action Comics while Top Spot was published by Top Spot Publishing Company. I think that both publisher names are divisions or variants of a larger entity called Gerona that also published a one-shot comic book called KO Comics, which features the third–and apparently final–appearance of The Duke of Darkness.

Since I originally found this comic book some years ago, some new information has popped up on the ‘net regarding its origin. Heritage Auctions features a listing for another copy of Atlas Theatre Comics with the same cover but a different interior. They describe the book as a “rarity from comic history” that  “contains a remaindered comic (various publishers were used) inserted into a locally produced cover…sold at movie theaters. The listing on their site features a copy of Atlas Theatre Comics with Captain Marvel Adventures #55 as the interior comic. The auction for their copy ended in November 2012, fetching just over $260. (Bear in mind the Overstreet 2012 value for the aforementioned Captain Marvel Adventures issue, graded GD 2.0, was around $33.) 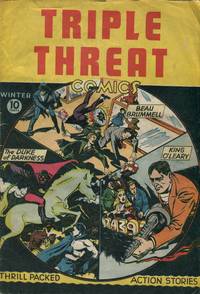 Regarding the “Atlas Theatre” name itself, my close inspection of the Atlas Theatre book gave me a few clues as to its origin. As I noted above, the cover is pretty unusual–not shoddy, but a low-budget production, for sure. On the inside near the spine, there appeared to be a kind of clear adhesive in some places and a chip of glossy paper that looked like it belonged to the cover of another comic book. All of the ads on the inside of the cover were for local businesses on Plymouth Road, including businesses like Blue Bird Department Store and Rose’s Sweet Shop. But the biggest clue was a business named Edmondson-Sweeney, Inc. Ford Dealer. A Google search yielded an ad from the 1950’s featuring a business with the same name on Plymouth Road in the Detroit area. There was also a movie theater in Detroit called Atlas Theatre that operated from 1939 to 1950. As noted in the Heritage description, Atlas Theatre Comics was likely part of a special promotion by Atlas Theatre and local businesses from Detroit back in the mid to late 1940’s. It was probably cheaper for them to buy a bunch of comics that were already printed and attach a custom cover than to have a totally new and special comic book printed solely for their own advertising purposes.

I am pretty enamored with Golden Age material, both for its charm and its simplicity. And when stuff like this is affordable, that’s an extra bonus. Best of all, in this case, Atlas Theatre Comics really has a story to tell in more ways than one. All in all, this is still a treasure, combining a Golden Age gem with some regional history.

*Note: I originally wrote the foundation for this article in November 2006 and posted it on my old site. It was significantly revised and expanded to post here.