Our Mandela, not theirs

It’s really incredible to see American right-wingers hail Nelson Mandela as a visionary and a champion of freedom while they’ve been doing their damnedest to smear and destroy everything and everyone who they consider to be remotely left-leaning, especially over the course of the past several years. During his incarceration, Mandela was condemned as a communist and a terrorist by the U.S.-backed Apartheid government and after his release, he enjoyed a well-documented, longstanding camaraderie with Fidel Castro. In fact, the speeches from their joint appearance on July 26, 1991 were published together in a book called How Far We Slaves Have Come! South Africa and Cuba in Today’s World. Below is an excerpt from Mandela’s speech:

The Cuban people hold a special place in the hearts of the people of Africa. The Cuban internationalists have made a contribution to African independence, freedom, and justice, unparalleled for its principled and selfless character.

From its earliest days the Cuban revolution has itself been a source of inspiration to all freedom-loving people. We admire the sacrifices of the Cuban people in maintaining their independence and sovereignty in the face of a vicious imperialist-orchestrated campaign to destroy the impressive gains made in the Cuban revolution.

We too want to control our own destiny. We are determined that the people of South Africa will make their future and that they will continue to exercise their full democratic rights after liberation from apartheid. We do not want popular participation to cease at the moment when apartheid goes. We want to have the moment of liberation open the way to ever-deepening democracy.

We admire the achievements of the Cuban revolution in the sphere of social welfare. We note the transformation from a country of imposed backwardness to universal literacy. We acknowledge your advances in the fields of health, education, and science.

That’s not exactly something you’d expect to hear from the likes of former Republican V.P. candidate Paul Ryan who posted a self-serving eulogy for Mandela via Twitter, “Nelson Mandela changed the world for the better. I was honored to meet him in 2000, and like many, I was moved by his dedication to freedom.” Then there’s Rick Santorum , who—with a straight face, apparently—likened the Republican effort to roll back the Affordable Healthcare Act to Mandela’s lifelong fight against Apartheid. Then again, he has also compared the marriage equality movement to the September 11 attacks. Hard to tell which example is the bigger stretch, really.

Hey, at least Dick Cheney has been consistent in his contempt and disdain for Mandela’s struggle. Along with Ronald Reagan—who has yet to receive his coveted spot as the fifth head on Mount Rushmore—Cheney opposed U.S. legislation that called for the repeal of South Africa’s Apartheid laws as well as the release of political prisoners like Mandela. He’s never offered even the slightest hint of regret for his position, either. Of course Mandela had no great love for the administration of George HW Bush, which Cheney served as Secretary of Defense. Following his release from prison in 1990, Mandela publicly criticized the Bush administration for prematurely lifting sanctions against South Africa’s racist government. It shouldn’t come as a surprise that even with the benefit of hindsight, guys like Cheney would’ve just as soon preferred to see Mandela imprisoned for the rest of his life.

It’s a credit to Mandela and his legacy that he had the courage to remain true to his guiding principles and face down the power elite of the “First World” after serving decades in prison at their behest and sustained approval. And still, many Republicans, Tea Partiers and so-called “Libertarians” will try to tie their philosophies of exploration and oppression to Mandela’s legacy. They don’t get it. They never will. 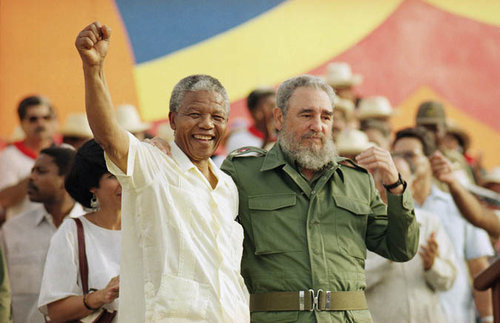