Back in late 1979, I went with my mom to visit the Jean Thomas Museum. Known far and wide as “The Traipsin’ Woman,” Thomas was most famous for her efforts at sharing and promoting Appalachian culture. Located in Ashland, Kentucky, the museum was actually a reconstructed version of her former home, which she had lovingly referred to as her “Wee House in the Woods.”

We were living in Russell at the time (in an area which is now Flatwoods) and an acquaintance of my mom invited her there for a reason that I can’t recall. The night before we went there, I talked to my dad about the fact that I was having some kind of anxiety about going our impending day trip. I’m not sure exactly what my issue was with the excursion but I was only six years old, so it could’ve been anything. Trying to assuage my concerns, my dad quipped — and I remember this distinctly — “Don’t worry; it’s just some old tourist trap.” Little did my dad know that just a few months prior, commercials for a horror movie called Tourist Trap had been in heavy rotation on television and what I’d seen of them scared the holy bejeezus out of me. Sooo…That didn’t exactly help. Nice try, Dad.

Despite my trepidation, I managed to survive the trip and although I don’t remember much about that day, I still have a cool picture post card that I got as a souvenir: 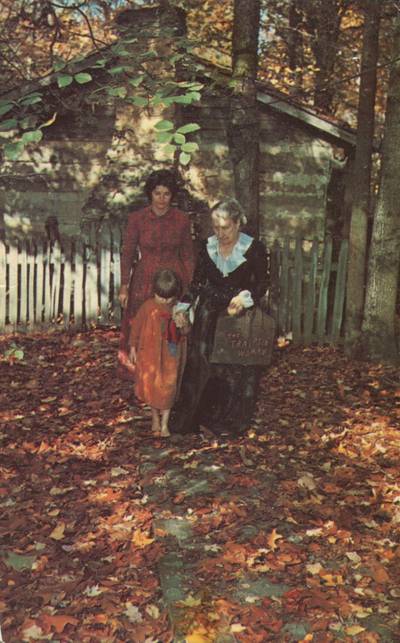 On the back, my mother wrote “Michael – December 10, 1979.” Here’s the original caption from the post card:

A CHILD SHALL LEAD THEM

In the background is McGuffey Log School, scene of the American Folk Song Festival, held annually on the second Sunday in June.

I’ve kept this post card in my scrapbook ever since my mom got it for me over three decades ago. Much later in life, at a time when I was able and willing to appreciate more about music and culture, I learned that Jean Thomas was one of the most influential women in the history of American folk music and Appalachian heritage. She passed away in 1982, just a year before we left the region to live in Central Kentucky.

This entry was posted in and so on..., Appalachian culture, Ashland, Kentucky, music and tagged Ashland, ephemera, Jean Thomas, Jean Thomas Museum, Kentucky, The Traipsin Woman. Bookmark the permalink.