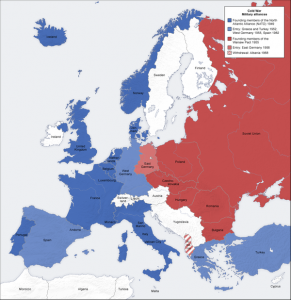 On November 25, 2005, the right-wing government of Poland publicized Cold War-era plans for Soviet nuclear strikes on NATO countries.  The plans were dated around 1979 and they ostensibly detailed a planned Soviet response to attack by NATO forces.

A series of red mushroom clouds over Western Europe show that Soviet nuclear weapons strikes would have been launched at Germany, the Netherlands, Denmark and Belgium if NATO had struck first. Red clouds are drawn over the then German capital, Bonn, and other key German cities such as the financial centre of Frankfurt, Cologne, Stuttgart, Munich and the strategically important northern port of Hamburg. Brussels, the political headquarters of NATO, is also targeted. Blue mushroom clouds, representing the expected NATO nuclear strikes, are drawn over cities in the eastern bloc, including Warsaw and the then Czechoslovakian capital, Prague. France would have escaped attack, possibly because it is not a member of NATO’s integrated structure. Britain, which has always been at the heart of NATO, would also have been spared, suggesting Moscow wanted to stop at the Rhine to avoid overstretching its forces. The exercise, entitled Seven Days to the River Rhine, indicated Warsaw Pact forces aimed to reach the Franco-German border within a week of a NATO attack.

Mr. Sikorski, who made a name for himself working for the rightwing American Enterprise Institute thinktank in Washington, made clear he was prepared for a backlash from Russia, whose president, Vladimir Putin, has lamented the demise of the Soviet Union.

Announcing the release of 1,700 Warsaw Pact papers from Poland’s military archive, he said: “This is crucial to educating the country on the way Poland was an unwilling ally of the USSR in the cold war. The map shows a classic Warsaw Pact exercise – it was a ‘counter’ attack to defend itself by going all the way to the Atlantic.”

Mr. Sikorski, who was appointed after the Law and Justice party won a surprise victory in the recent elections after pledging to cleanse the country of its communist past, believes the map shows how Moscow was prepared to sacrifice Poland to save the Soviet Union. (full article)

What came into light, by and through the release of these Warsaw Pact documents, was the likelihood that Europe would have been the primary stage for a nuclear showdown between the superpowers at the height of the Cold War.

But was this concept that shocking? And was it that implausible that NATO would act offensively against the Warsaw Pact nations? 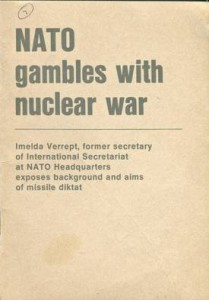 In early 1980, Belgian Imelda Verrept, a former secretary in the International Secretariat of NATO Headquarters in Brussels, defected to the DDR with secret NATO documents that outlined the NATO position vis- à-vis the risk of a nuclear counter-strike.  She was interviewed by ADN on DDR television in April 1980 and at that time she shared her knowledge of how Europe would fare as a result of a NATO-initiated nuclear conflagration:

ADN:  Another indication that crucial importance is attached to nuclear weapons in NATO’s military strategy and in its war preparations:  The suggested deployment of new missles alone…is evidence of their planned function in the Pact’s military strategy which is aimed at a military attack on the socialist countries.

MRS. VERREPT: (N)uclear capability would “put NATO in a better position to guarantee flexible response and forward defence, to engage in measured escalation and, if necessary, resort to a full-scale nuclear war”.

For “forward defence”, a piece of doubletalk belonging to NATO’s disinformation system, one should in fact read “aggression”. There is no chance of NATO being content with the 572 new nuclear missiles. The missile decision already contains new proposals for expanding its nuclear capability in Europe.

I am no military expert, but the perusal of…many other NATO documents caused my suspicion that the USA was wanting to incite Western Europe into a nuclear war against the socialist countries, without risking the destruction of American cities, to harden into a certainty. The missile decision makes possible a strategy advantageous to the USA.

ADN: One could call that unhitching the USA from the danger of a nuclear counter-strike which would be directed exclusively against Western Europe.

MRS. VERREPT: Various prominent individuals have addressed themselves to this question, for instance Mr. Schmückle in a newspaper interview, Mr. de Vries, Chairman of the Defence Committee in the Dutch Parliament, and also Mr. Kissinger recently in Brussels. He said there was little likelihood of an American President being prepared to react immediately with strategic nuclear weapons to a threat directed exclusively at Western Europe and hence risk the destruction of American cities. One has to read a bit between the lines here.

ADN: Is this danger recognized by people in Belgium?

MRS. VERREPT: I hope that my remarks on the subject will help them to recognize it. In NATO there is a lot of harping on the themes of Atlantic solidarity and obligations to the alliance. No one needs any reminding, however, that the USA has always gone it alone when it suited its interests to do so. 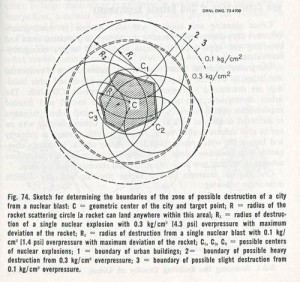 Having attended elementary and middle school during the Reagan era, I vividly recall  how frequently the topic of nuclear war was raised during classes, including social studies, reading and so forth. One of the mantras that teachers used to cap their lessons on nuclear war was the thought-provoking phrase, “In a nuclear war, nobody wins.”  Back then, I guess I didn’t realize that when they said “nobody wins,” the words were especially true for the people of Europe who lived each day amidst the omnipresent threat of nuclear Armageddon, be it from the Warsaw Pact’s missiles in the East or via NATO’s skies to the West.

Decades later it’s a hard sell as to whether or not we’re any better off than we were during the Cold War.  The Center for Defense Information estimates that both the United States and Russia currently have around 10,000 nuclear weapons each in their respective stockpiles.  Moreover, there are now more countries with their own nuclear weapons that at any point during the Cold War era and it’s generally held that a localized or regional conflict (like a nuclear exchange between India and Pakistan) would wreak havoc on life far and wide – after killing millions in the initial conflict, of course.  The geopolitical fallout caused by the fall of the USSR has also provided new opportunities at all corners of the globe for exploitation  and subjugation of the world’s working people.

No doubt that there is some bliss in maintaining a spirited and collective ignorance of a shared life spent on the brink of annihilation but it’s hard to say what the world will be like if people wait too long to wake up.