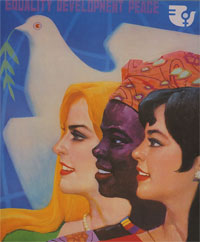 International Women’s Day, as described by Alexandra Kollontai, began as “a day of international solidarity, and a day for reviewing the strength and organization of proletarian women.”  Established through the determination of radical activist and organizer Clara Zetkin and a resolution adopted at the International Conference of Working Women the first IWD was marked in 1911.   Today, IWD is commemorated around the world as “a global day celebrating the economic, political and social achievements of women past, present and future.”

Decades before the invasion by fascist Germany, the USSR had the tremendous foresight and vision to place men and women on an equal footing in virtually every walk of life, including military service. Indeed, women like Red Army sniper Lyudmila Pavlichenko (1916-1974) were a tremendous asset to Soviet forces in the battle against the Nazi onslaught and the bane of imperialist aggressors at almost every turn. For her part, Pavlichenko logged a total of almost 309 confirmed kills during her time in action against Hitler’s forces, earning her celebrated spot in history as the greatest female sniper of all time.

In recognition of International Women’s Day 2012, an excerpt from Pavlichenko’s “Message to the American People” (1942) is presented below. I originally transcribed this for the scholarly website Marxists Internet Archive in April 2011 and the complete article is posted in MIA’s Soviet History Archive. 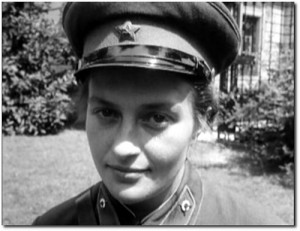 108 people, all of them old and ill. And so depraved are those Hitlerites that the old women had all been raped. Things like this could sometime happen to you if Hitler wins more victories.

In closing I have a special message for American women. I would like them to know first about our mothers. Soviet mothers love their children enormously. I know how much my mother loves me—and yet she writes to me: “I want to see you more than anything—but don’t come home until you come with victory.” And when their sons are killed our mothers do not stop to mourn—they work all the harder. Soviet mothers send their sons to the front, and if necessary their daughters too, without tears in their eyes. They know that it is necessary. While women are not regularly a part of our armed forces, many are fighting in one way or another. There are many, many cases where mothers whose sons are at the front become guerrilla fighters. Our women were on a basis of complete equality long before the war. From the first day of the Revolution full rights were granted the women of Soviet Russia. One of the most important things is that every woman has her own specialty. That is what actually makes them as independent as men. Soviet women have complete self-respect, because their dignity as human beings is fully recognized. Whatever we do, we are honored not just as women, but as individual personalities, as human beings. That is a very big word. Because we can be fully that, we feel no limitations because of our sex. That is why women have so naturally taken their places beside men in this war. We have a tradition, too, to live up to. There was Durova, the Russian woman guerrilla, who fought against Napoleon’s invading armies in 1812, and Dasha Sevastopolskaya who fought in the heroic defense of Sevastopol in 1854-55. So in today’s war our women have carried on these traditions—and added something. The names of many of them have already been immortalized Lisa Chaikina, Tanya (Zoya) Kosmodemianskaya, Maria Baida, Nina Onilova, Valya Phillipova—and scores of others. Our women have proved that we can master machines and technique as well as men can, that we can have as much will and determination as men can, that we can kill our enemies as well as men can. It seems strange to many Americans that women go into battle. They seem to think the war has changed them into some strange kind of creature between a man and a woman. But we are still feminine beings. We can still wear nice clothes and have polished fingernails in the proper time and place. We remain women and human beings as before. The war has made us tougher, that’s all.

This entry was posted in and so on..., marxism, zilch and tagged Alexandra Kollontai, Clara Zetkin, IWD, Lyudmila Pavlichenko, USSR, women. Bookmark the permalink.