Postscript to “Do dogs know they have faces?”

Are not our feelings the most glorious part of our life?

Over on ABCNews.com, there’s an article entitled “The Joy of Your Brain…and the Dark Side of Laughter” that touches on some of the questions raised in my previous hodgepodge of an essay, “Do dogs know they have faces?” Included in the article are some preliminary findings by Jaak Panksepp in the area of animal emotions and communication. The piece even features a veiled reference to Thomas Nagel’s work “What Is It Like To Be a Bat?”.

There’s still good deal to be done in this field, for sure. Panksepp is a long way off from showing that animals – any animals – have a “cognition pyramid” resembling that which Feliks Mikhailov discussed in his 1976 work Riddle of the Self. The question of emotion is nevertheless firmly rooted in questions of cognition and consciousness, so there are fundamental questions that need to be answered before anyone definitively concludes that rats, dogs and the like can “feel” emotions the way humans do. 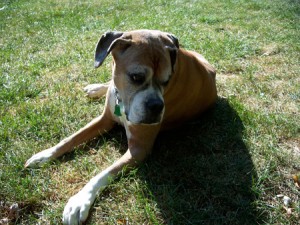 Anecdotally, the question is far more nuanced. When our 13 year-old boxer passes away a few years ago, our little dog Stupsi (whom I discussed in my original musings on this subject) was clearly affected by the absence of her longtime pal, not to mention the overabundance of human grief that was swirling about her. It’s fair to say – I suppose – that how we feel about our pets (and how we behave toward them in turn) is what sustains the storied relationship between man and beast.

This entry was posted in and so on..., marxism, materialism. Bookmark the permalink.