Mixtape Mixdown: The End – Music to Ring in the 2012 Armageddon 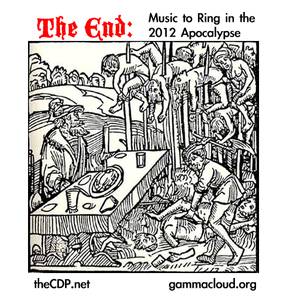 My offering for the trade is a CD entitled “The End: Music to Ring in the 2012 Armageddon” and the overall concept is a tongue in cheek nod to the to the end-time hysteria that’s picking up as the proverbial “zero hour” approaches. Some of the references are subtlen and otheres are front and center but I think at the end of it all (pun intended) I’ve assembled a funny, yet mildly spooky compilation of mood music for doomasayers.

Opening the collection is an “audio collage” I created entitled “It Begins.” (Listen to the complete track here.) I made this using GarageBand and a few of samples. Most of the loops are standard GarageBand fare, slightly tweaked using effects and filters. I played the keyboard parts directly into GarageBand and I was going for something that felt like the background music from a vintage episode of Tales From the Darkside. The first spoken word sample is a memorable scene from Night of the Living Dead and the wind effect is from soundbible.com and it’s used via Creative Commons license. The final sample is from an online reading of The Book of  Revelation, 14:1-3 (New American Standard Bible). My wife refuses to listen to this track in its entirety.

The cover art for this CD is from the 15th century woodcut of Vlad the Impaler eating before the impaled corpses of his foes.

Here’s the complete track listing for my mix:

This entry was posted in and so on... and tagged 2012, armageddon, mixtapes, Probot, Ryan Zeinert, The Book of Revelation, thecdp.net, Venom The Battle Royale, Vlad the Impaler. Bookmark the permalink.