On Bakunin, Marx and the lumpenproletariat: part one

In his recent article, “A Master Class in Occupation,” author Chris Hedges  effectively renews a century and a half of controversy between two giants in political economy, Mikhail Bakunin and Karl Marx, discussing their respective influences on the Occupy Wall Street Movement. Leaning decidedly towards the alleged merits of Bakunin, Hedges provides an overview of the rift between the men, emphasizing their differences on what and who to mobilize in the pursuit of revolutionary social change.

The very publication of such work clearly underscores the fact that the Bukharin/Marx feud remains one of the most discussed, analyzed and perpetuated schisms of the radical left to this very day. In the most basic of terms, the split between the two men was the product of a fundamental philosophical difference between the communist and anarchist schools of thought (I say “schools of thought” here as opposed to “revolutionary movements” to emphasize their contributions to the general discourse of method over, say, revolution in action). Of the various points of departure between the two, the conceptual definition of the lumpenproletariat and the political along with the purported political definitions thereof, proved especially contentious. 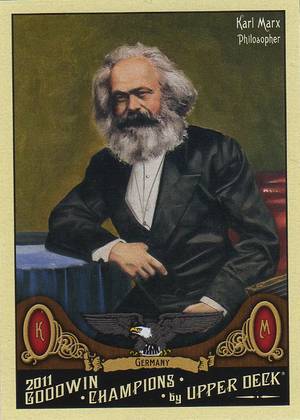 Marx and Engels first used the term “lumpenproletariat” in their landmark work The German Ideology. Written in 1845-1847, the book presented their materialist concept of history, establishing a foundation for some of their important later works on communism and political economy. Included in the volume was their critical polemic regarding the philosophy of anarchist Max Stirner and his 1844 treatise on individualism, The Unique and His Property.[1]

It was in this context that Marx and Engels touched upon the origins and composition of the lumpenproletariat.

Such are Saint Max’s “own” ideas about the bourgeoisie and the proletariat. But since with these imaginations about liberalism, good burghers and vagabonds he, of course, gets nowhere, he finds himself compelled in order to make the transition to communism to bring in the actual, ordinary bourgeois and proletarians insofar as he knows about them from hearsay. This occurs on pages 151 and 152, where the lumpen-proletariat becomes transformed into “workers”, into ordinary proletarians, while the bourgeois “in course of time” undergoes “occasionally” a series of “various transformations” and “manifold refractions”. In one line we read: “The propertied rule”, i.e., the profane bourgeois; six lines later we read: “The citizen is what he is by the grace of the state”, i.e., the holy bourgeois; yet another six lines later: “The state is the status of the middle class”, i.e., the profane bourgeois; this is then explained by saying that “the state gives the propertied” “their property in feudal possession” and that the “money and property” of the “capitalists”, i.e., the holy bourgeois, Is such “state property” transferred by the state to “feudal possession”. Finally, this omnipotent state is again transformed into the “state of the propertied”, i.e., of the profane bourgeois, which is in accord with a later passage: “Owing to the revolution the bourgeoisie became omnipotent” (p. 156). Even Saint Max would never have been able to achieve these “heart-rending” and “horrible” contradictions — at any rate, he would never have dared to promulgate them — had he not had the assistance of the German word “Bürger”, which he can interpret at will as “citoyen” or as bourgeois” or as the German “good burgher”.[2]

In 1848, Marx and Engels expounded upon the origins and nature of the lumpenproletariat in Chapter One of The Communist Manifesto:

The “dangerous class”, the social scum, that passively rotting mass thrown off by the lowest layers of the old society, may, here and there, be swept into the movement by a proletarian revolution; its conditions of life, however, prepare it far more for the part of a bribed tool of reactionary intrigue.[3]

It is most important to note that Marx did not necessarily have an axe to grind with the working poor or poorer classes in general but instead with specific elements who might undermine or actively oppose the efforts and objectives of a radicalized working class, Bakunin , instead, asserted an almost unconditional faith in the lumpenproletariat’s alleged value to the movement. In her 2003 essay “The Philosophical Roots of the Marx-Bakunin Conflict,” Ann Roberts summarized the difference of opinion thusly:

Both [Bukharin and Marx] agreed that the proletariat would play a key role, but for Marx the proletariat was the exclusive, leading revolutionary agent while Bakunin entertained the possibility that the peasants and even the lumpenproletariat (the unemployed, common criminals, etc.) could rise to the occasion. Bakunin argued, for example, that the peasants were a revolutionary class for three reasons: (1) They have retained “the simple, robust temperament and the energy germane to the folk nature.” (2) They work with their hands and despise privilege. And (3) as toilers they have common interests with workers.55 In other words, being close to nature, the peasants are less alienated from their true, natural essence since they have suffered less corruption by the evils of society.[4] 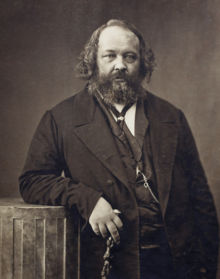 Indeed, in his 1872 book Marxism, Freedom and the State, Bakunin fully articulated his position on the distinctions between the workers and the lumpenproletariat , effectively presenting the latter as the prospective salvation of the revolutionary movement, implicitly opposing an ostensible imminent calcification of the proletariat at its highest stratum.

To me, however, the flower of the proletariat does not mean, as it does to the Marxians, the upper layer, the most civilized and comfortably off in the working world, that layer of semi-bourgeois workers, which is precisely the class the Marxians want to use to constitute their fourth governing class, and which is really capable of forming one if things are not set to rights in the interests of the great mass of the proletariat; for with its relative comfort and semi-bourgeois position, this upper layer of workers is unfortunately only too deeply penetrated with all the political and social prejudices and all the narrow aspirations and pretensions of the bourgeois. It can be truly said that this upper layer is the least socialist, the most individualist in all the proletariat.

By the flower of the proletariat, I mean above all, that great mass, those millions of non-civilized, disinherited, wretched and illiterates whom Messrs. Engels and Marx mean to subject to the paternal regime of a very strong government…Without doubt, this will be for their own salvation, as of course all governments, as is well known, have been established solely in ‘the interests of the masses themselves. By the flower of the proletariat I mean precisely that eternal “meat” for governments, that great rabble of the people ordinarily designated by Messrs. Marx and Engels by the phrase at once picturesque and contemptuous of “lumpenproletariat”, the “riff–raff”, that rabble which, being very nearly unpolluted by all bourgeois civilization carries in its heart, in its aspirations, in all necessities and the miseries of its collective position, all the germs of the Socialism of the future, and which alone is powerful enough to-day to inaugurate the Social Revolution and bring it to triumph.[5]

But while Bakunin’s unflagging support for the lumpenproletariat is often hailed as an optimistic assessment of the dispossessed and disaffected, his critique of the Marxist assessment of the lumpenproletariat is rather one-sided and idealistic. Moreover, it is inaccurately juxtaposed with the communist experience in China. Forthcoming installments in this series will address the aforementioned problems of Bakunin’s position on these and other matters.

[1]  Der Einzige und sein Eigentum, also translated as The Individual and His Property.

[2] From The German Ideology by Marx & Engels.

[3] From The Communist Manifesto by Marx and Engels.

[4] From “The Philosophical Roots of the Marx-Bakunin Conflict” by Ann Robertson.

[5] From Bakunin’s Marxism, Freedom and the State.

This entry was posted in economics, marxism, materialism, social sciences. Bookmark the permalink.