In 1979, Dave Widgery wrote of his “love” for E. Sylvia Pankhurst in a Radical America piece entitled Sylvia Pankhurst: Pioneer of Working Class Feminism.  The article was written almost two full decades after Sylvia’s death in 1960 and even today, it still serves as a concise yet insightful summary of her struggle as a legendary champion of women and the working class.  In his assessment of her work and character, Widgery made careful note of Sylvia’s most important contributions to the revolutionary movement:

There are those in political movements who make original and creative advances in theory, those who can communicate established political ideas imaginatively, and those who have the gift of organising to make political change. She always insisted on doing all three.

It was just recently that I became somewhat familiar with the work and writings of Sylvia Pankhurst.  I had heard a little about her here and there, most notably in Widgery’s article, but prior to that, I had read a little of her in Lenin’s “Left-Wing Communism: an Infantile Disorder“, a piece which gave Sylvia some notoriety as she was a rather prominent discussion topic in the section entitled “Left-Wing” Communism in Great Britain.  According to Widgery:

It is a very good example of the masculine bias of the revolutionary movement that she is generally known as no more than a woman who received the blunt end of the Lenin pamphlet, Left Wing Communism, an Infantile Disorder. (In the same way, Kollontai, until she was rescued by modern socialist feminists, was known, if known at all, simply for her role in the Workers’ Opposition.) In the revolutionary movement, like everywhere else, women have to do better than men before they achieve equal recognition. 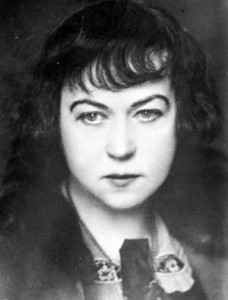 Lenin and Pankhurst had corresponded directly some time before he authored Left-Wing Communism, as evidenced in his August 28, 1919 letter to Sylvia Pankhurst in which he laid out the framework for his critiques in the aforementioned work.  And, indeed, Sylvia did have to work hard to gain recognition from her fellow revolution

aries, and in some cases her struggle led to political difficulties and personal detriment.  She was expelled from the Suffragettes in 1914 and later by the CPGB following significant political differences with both organizations.  In 1919, Sylvia was tried for agitating amongst British forces.  At her trial, Sylvia pulled no punches as she told the trial judge of her contempt for the military-industrial complex and the exploiting classes:

“I started four clinics and have sat up night after night with the little ones. I also set up a day nursery but all my experience shows me it was useless to try to palliate an impossible system. It is the wrong system and has got to be smashed. I would give my life to smash it.”

Although she had masterfully crystallized the sentiments of the revolutionary movement in just a few short sentences, she went on to author more detailed  critiques of capitalism and imperialism in later years.  Her 1923 work Socialism (an article from Worker’s Dreadnought) is one such example.  In this work, she wrote:

We wish to abolish poverty and to provide abundance for all.

We do not call for limitation of births, for penurious thrift, and self-denial. We call for a great production that will supply all, and more than all the people can consume.

Such a great production is already possible, with the knowledge already possessed by mankind. Sylvia accomplished much through her life’s work.  She traveled far and touched many.  She was a prolific writer and a radical activist who endured arrest and political and physical isolation for her causes. In the 1930’s, she supported the republicans of the Spanish Civil War and during World War II, she aided Jewish refugees as they fled Nazi Germany.  Following the Italian invasion of Ethiopia, she became an avowed and outspoken antifascist.  She wrote extensively on conditions in Ethiopa and she went on to author a volume on Ethiopian art and culture, raising Western awareness regarding life in the African country.  She also went on to fund Ethiopia’s first teaching hospital in later years and she ultimately left Europe with her son in 1956 to live in Addis Ababa where she remained until her death.

It’s easy to understand and appreciate Dave Widgery’s feelings of admiration affection for Sylvia Pankhurst after spending just a little time getting to know Sylvia through her work and her writings.  There’s an old, relatively obscure Beatles track called “To Know Her is to Love Her“.  When it comes to Sylvia, the song’s title certainly rings true.

This article was written for Thomai.  To know her is to love her.