WrestlePasta – Coming Out Both Ends: 5 Times Guys Puked or Pooped In The Ring

(Originally penned for a now-defunct endeavor way back in January 2015.)

Surely the most astute readers have heard of the old “lump under the rug” analogy. You push it down in one spot and it’s bound to pop up somewhere else, right? It turns out the same thing is true with regard to the human body. You can only push and squeeze so much and sooner or later, something is coming to come chugging out of an orifice. And despite all of those slack-jawed yokels who insist on calling professional wrestling “fake,” a lot of the blows and collisions that occur inside of the squared circle really do connect and that’s where Newton’s third law comes in. (No time to explain that last sentence right now; look it up on your own time.)

Notice: There won’t be any jokes in this article about Randy Orton pooping in purses since that (allegedly) happened in the dressing room.

Thanks to old-school videotapes, cell phone cameras, and that peculiar phenomenon known as the “shoot interview,” we have some rather excellent primary resources that show what exactly happens when wrestlers’ bodies revolt against the rigors of in-ring physicality. Roll that beautiful bean footage…

Balls Mahoney Loses His Lunch – And Dinner – After A Chair Shot

Despite being put through a barber shop window decades ago, Marty Janetty still knows how to swing a chair. The former rocker crowned Balls Mahoney with a chair of the folding variety at the PWS Super Card show back in 2012 and hilarity ensued when Mahoney eventually upchucked. It started as a trickle and eventually grew to a fountain. Thankfully, the canvas was spared as Balls had the presence of mind to move to the edge of the ring and direct his spray outward. Enthusiastic fans probably considered the wayward splatters as an added bonus. After all, if it had been Hulk Hogan spewing vomit at that show, he’d have charged fans 50 bucks a chunk, right?

Remember that edition of WrestlePasta that covered all of the nasty crap that you can catch from a filthy ring mat? Well, consider the canvas from this vintage TNA pairing as a veritable petri dish brimming with all sorts of infectious pathogens. Shane Douglas and Raven had been embroiled in a nasty feud for weeks heading into this hair versus hair contest and although they brawled all over the arena, the grossest spots went down in the ring. Of course there was a fair amount of blood involved – what would you expect with two ECW originals in PPV bout – but the part of this match that everyone remembers is the point at which “The Franchise” Shane Douglas throws up again and again, all over the freaking place.

Be thankful for the emoji.

Vomit started creeping out of Shane’s pie hole while he had Raven down on his back but he was able to hold most of the yellow tide back for the moment. When he got to his feet and tried to work against Raven, a bit more came, and once The Franchise ended up back on the mat himself, he cut loose and didn’t hold anything back. Then the match continued… and they rolled around in puke and blood for several more minutes.

Unfortunately, the whole bout isn’t on YouTube at the moment – or if it is, it’s not terribly easy to find. But the whole, uncensored match is included on the excellent DVD set The Best of the Asylum Years, Volume 1. It’s completely uncensored, including a noteworthy scene in which Shane Douglas shows off his blood covered hand to an unnamed woman in the front row who turns out to be Angelina Love. The whole disgusting scene in which James Mitchell shaves Raven’s bloody head in the middle of the ring makes for some fabulous mealtime viewing, as well.

Consequences Creed And The Hurl-canrana

Blink and you missed it. No, we’re not talking about Amazing Red’s run in TNA. Then again…

Amazing Red hit the man now known as Xavier Woods with a wicked maneuver during their ladder match inside of TNA’s six-sided ring with the unintended consequence of a geyser of foamy discharge spewing from Creed’s mouth. Being the classy outfit that we all know them to be, TNA immediately re-racked the footage so we could all get a better look. Jeremy Borash dubbed it a “projectile hurricanrana.” Cute.

Titus O’Neil Does The Deed In JBL’s Hat

There are probably other examples of folks throwing up during TNA matches, but why give them all the credit? WWE had a gut-wrenching segment back in 2013 when Titus O’Neil suffered the effects of Cesaro’s “Big Swing.” WWE censored the worst of O’Neil’s esophageal eruption but everybody pretty much got the gist of what was going on. Truth be told, the thing was so wonderfully staged, it was probably all a work — but hey, it was still good for a laugh.

Bret Hart Almost Gets A Face Full of Yokozuna’s Diarrhea

He said it was the grossest thing he’d ever seen in all his years as a grappler. And yeah, you’ve probably seen some nasty stuff in your life… after all, everybody poops, or so we’re told. But how about the sight of a platter full of poop heading straight for your face with almost 600 pounds and the force of gravity providing some rather exceptional momentum? Few – if anyone – can relate to that horrible sight.

Bret Hart told broadcaster Arda Ocal that it all went down in India years ago when legendary big man Yokozuna got sick during a WWE tour. He got in the ring anyway and during a critical point in the match, he tried to execute his signature “Banzai Drop” which basically involved him jumping butt-first on to the face of his rival below. Hart, Yoko’s opponent on the night in question, said he looked up to see his rival’s posterior covered in number two goo, describing the sight by saying “he looked like he had fallen in a plate of pea soup.” Hart dodge the butt bomb at the last minute, but noted that a “brown and wet” patch was left on the ring where Yokozuna landed.

Few will ever know the struggle, Bret. 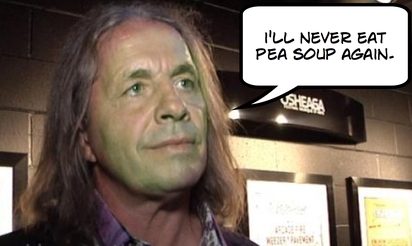 This entry was posted in and so on..., professional wrestling and tagged Balls Mahoney, Bret Hart, Cesaro, ECW, Shane Douglas, Titus, wrestling, WWE. Bookmark the permalink.