In a few other places on this blog, I’ve shared samples from my collection of ephemera, including an interesting post card from WWII-era U.S.S.R. and one featuring “Traipsin’ Woman” Jean Thomas.

This time around, I’m showing off a recent acquisition that features a scene from the distant past of my hometown of Ashland, Kentucky. Bearing the title “The Sun Shines Bright on My Old Kentucky Home” (a reference to Kentucky’s official state song), the picture post card shows a turn-of-the-century homestead in Boyd County. The item itself is not terribly rare but what I find particularly intriguing about this one is its handwritten personal message as well as postmarks on the front and back of the card. 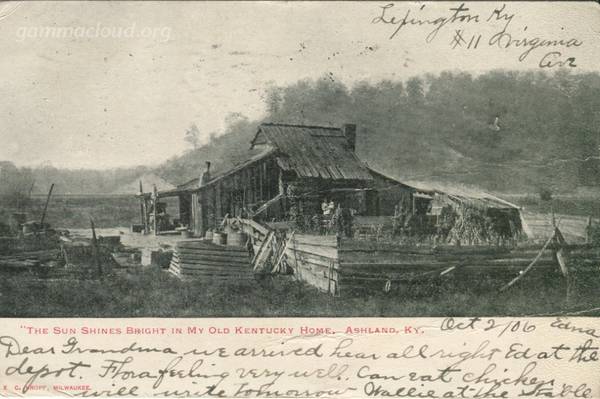 The sender’s name was “Edna” and she resided in Lexington, Kentucky (where I also lived for a short time in the 1980s.). The post card was addressed to Edna’s mother, Mrs. S.J. Allen who lived in Point Pleasant, West Virginia. Dated October 2, 1906, the message reads as follows:

The backside of the post card features post marks from Lexington, Kentucky (October 3) and Point Pleasant, West Virginia (October 4). All in all, this piece of mail reached its destination between 48 and 72 hours from the time that it was written, which is actually pretty impressive given that the term “supply chain management” wasn’t invented until about eight decades later. The efficiency of the Postal Service back then likely had a lot to do with the Chesapeake and Ohio Railway, which flourished throughout that area at the time. 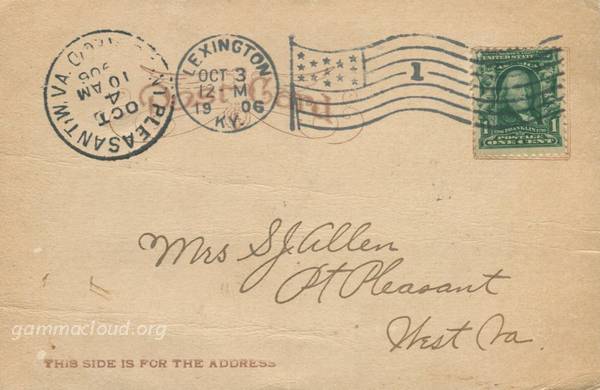