The Story of The New York Dolls, Part I

American author E.B. White once wrote: “One of the most time-consuming things is to have an enemy.”  One might well consider this statement to be one of the most fundamental axioms in the world of pro wrestling as the careers of many a great wrestler are often made not on the merits of one or two big matches but through the kind of stirring and vitriolic feuds that last weeks, months and sometimes years.  Such is the case of the legendary “Fabulous Ones” of the Memphis/CWA territory.  Formed in the early 1980’s, this celebrated duo should easily rank in the top tier in any authoritative list of the greatest tag teams of all time.  But the epic tale of just how and why these celebrated babyfaces (known affectionately to fans as “The Fabs”) came to be begins not with a story of virtue or valor but with one of intrigue and opportunism; It begins with The New York Dolls.

In many respects, the Continental Wrestling Association’s Memphis territory was, in its heyday, a virtual training camp for the kind of big-name talent that ultimately dominated conglomerate promotions like WWF and WCW during the Monday Night Wars and the Attitude Era.  By the end of the 1970s, legendary manager Jimmy Hart had all but cornered the market on the Memphis area’s heel heat.  The roster of “clients” under his Memphis-era tutelage reads like a veritable “Who’s Who” list of the most popular wrestlers of a generation, including such legends as Jimmy Valiant, Dutch Mantel, The Iron Sheik, Austin Idol, Rick Rude, Jerry Lawler and even Andy Kaufman.  Although the names and styles of his clientele changed from year to year Hart’s First Family was the premier stable in the territory.  Within just a few years, the First Family’s roster boasted unique characters such as Kimala I and his lesser-known associate Kimala II as well as battle-hardened veterans like Sweet Brown Sugar (aka Koko B. Ware) and “Beautiful” Bobby Eaton. 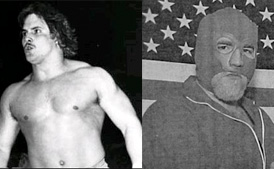 Before they were Dolls: Rick McGraw and The Dream Machine

Whether the credit ultimately lies with Hart himself or with the owners and promoters of Memphis/CWA, it is nevertheless accurate to say that the First Family was always looking to expand and diversify, thereby maintaining a firm grip on the region’s supply of heel heat.  That very idea seemed to be at the forefront of Hart’s mind one Saturday in 1982 when he introduced The New York Dolls to the faithful viewers of Championship Wrestling.  Standing before ring announcer/commentator Lance Russell and his colleague Dave Brown, Hart:

I have outdone myself this time.  I have really outdone myself this time.  Because, ladies and gentlemen…and I use the words “ladies and gentlemen” very, very loosely out here talkin’ to you now…But I’ve put my mind to work.  And I have put together, Lance Russell, the greatest team in professional wrestling today.  And I’m gonna bring them out.  I want you people…Come on, I want everybody to stand up.  I want everybody up!  Everybody up!  Come on, you idiot people over there, UP!  Put your hands together and welcome the greatest team in professional wrestling today:  THE NEW YORK DOLLS!
With that, The Dolls emerged from backstage, greeted by a cacophony of boos and catcalls from the studio audience.  Strutting their way to the announce table dressed in white tuxedo coats and sporting top hats and canes, The Dolls absorbed every last bit of heat from the crowd as they reveled in the white-hot limelight.  Jimmy Hart was absolutely beside himself, nearly hysterical with glee at his newest creation.  To Hart, it was clear that the spark of his creativity was about to again ignite a virtual prairie fire upon the world of pro wrestling.

Dolled Up and Decked Out 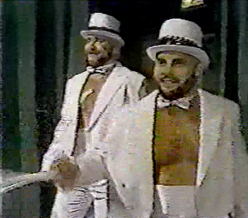 The world’s first glimpse of The Dolls: The Dream Machine and Rick McGraw

The New York Dolls were no strangers to the Memphis territory.  Both wrestlers were already accomplished as solo grapplers.  “Quick Draw” Rick McGraw had been in the territory for a year or so prior to his involvement with The Dolls, effectively executing the kind of mat-heavy, smash mouth style that sold so well in the southern promotions.  As a masked wrestler, The Dream Machine (Troy Graham) had also been something of a standout in Memphis for some time, feuding with area superstar Jerry Lawler and ultimately holding the Southern Heavyweight Championship for nearly six months in 1981. Dream gave up his mask as part of his repackaging for this particular gig and both wrestlers underwent a complete makeover, sporting bleach-blond coifs and matching regalia.

The studio audience was, of course, less than impressed with the pomp and circumstance.  But as the Dolls stood posing and mugging for the cameras, Hart dropped his second bombshell of the day announcing that The Dolls would wrestle their first match at the Mid-South Coliseum that very night, challenging Steve Regal & Spike Huber for the World Tag Team Championship.  Yes indeed, Hart was starting his new team at the very top of the card and he not only guaranteed their victory, but pledged to leave the Memphis territory for good.

The New York Dolls lived up to the hype, quickly capturing the tag titles quickly from Regal and Huber (They again dominated Regal and Huber later that year in a rematch which left the golden-maned Regal a beaten and bloody mess).  Moreover, they established themselves as one of the premier tag teams in the territory, dispatching a cavalcade of jobbers and mid-card talent alike.  Their victories were fierce and often ended with bloodletting on one or both sides of the squared circle.  Hart and the Dolls continually taunted everyone week after week, rolling out over-the-top promo spots in which lance Russell played the part of the stoic straight man amidst their tirades of arrogance and bravado.  But while the fans were focused on the in-ring dominance and smug conceit of Hart and The Dolls, a new angle was developing behind the scenes that would bring a number of familiar faces back to the forefront of Memphis/CWA action for many years to come.

By their very existence, The Dolls had set off a chain reaction that would change the face of the entire territory for years to come.

To be continued; Click here to read Part II