Armageddon Theater: The Day After 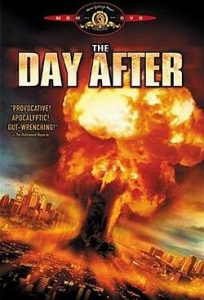 By the 1980s, children of the Cold War knew that those “duck and cover” drills were meaningless. We were living in the era of ICBMs and the doctrine of “Mutually Assured Destruction.” It’s really hard to overstate how the idea that the world can end at any given minute permeates the psyches of children in this era, including me. I suppose this is why I considered the idea of a nuclear holocaust to be scariest kind of apocalyptic/post-apocalyptic storytelling. It was the most plausible kind of armageddon to me and, in many respects, a fair amount of the American public (and probably the people of the USSR) seemed pretty sure that it was our destiny to perish by our own hands, either in a nuclear war or in its horrible, unthinkable aftermath.

The Day After was a clarion call to sensibility at many levels, bringing a dramatic depiction of death and destruction to the American public in a manner that had never been attempted before. In hindsight, I think it was really directed at the youth of America; parents were encouraged to watch and discuss the film with their kids, teachers talked about it in schools and kids certainly discussed it with one another. It was a frightening time as well as an important turning point, as the tone and imagery of the film was gravely serious and brutally forthcoming with information that Americans had conveniently ignored for the better part of the Atomic Age.

When The Day After first aired in 1983, my parents decided I was too young to watch it, but my siblings and many of my friends who saw it were profoundly affected by what they’d seen in the film. It wasn’t until many years later that I finally caught the whole movie on cable and by then, I was a young man and the Cold War was over. Nevertheless, watching the film, I realized just how close we’d all been to the brink of complete destruction for such a long time and it was a rather disturbing revelation, for sure. To this end, The Day After really delivered on its message and mission.

This entry was posted in Russia, USSR and tagged armageddon, Cold War, communism, nuclear war, The Day After, USSR. Bookmark the permalink.