Hidden Gems: Superman vs. The Supernatural 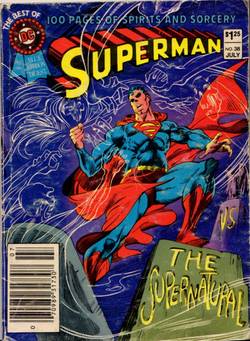 Whenever I have the time (and time is surely a precious commodity to me these days), I love to aimlessly wander the stacks of musty, dingy secondhand book shops and comic stores. Even if I’m not in a buying mood, seeing old covers of comic books really brings back a flood of memories from my three decades of reading and collecting. Such was the case with my recent trip to Dark Star Books in Yellow Springs, Ohio, a shop that I visit about twice a year. When I last visited there, I was especially excited to find a small cache of digest-sized comic anthologies tucked away in a corner of their comics section, including various editions of The Best of DC: Blue Ribbon Digest comics.

Generally speaking, I typically prefer to acquire individual comics as opposed to collecting anthologies and reprints but there’s something about the digest volumes that I’ve always appreciated, especially as a kid. I think it had something to do with the fact that these editions were compact while still managing to pack a lot of material into each volume. As far as I can recall. The Best of DC: Superman vs. The Supernatural  was the first digest-sized comic I ever owned. I got it back in 1983, probably on a trip to a drugstore or as an impulse buy while in the checkout line of a grocery store. In retrospect, I’m surprised that I ever even scored this, as the $1.25 cover price was pretty steep back then. But with 100 pages of vintage Superman goodness – spanning the Golden Age to the Bronze Age – it was a good buy, for sure. I loved this book so much back then that I used to sneak it to school every day in my backpack. I even scrawled my name on the inside front cover with pencil and marker, something that’d be unthinkable to me when I became more serious about collecting comics.

I was 10 years old and in the third grade in 1983 and the idea of Superman going toe-to-toe with a slew of phantoms and wizards was compelling reading, indeed. As any fan worth his or her salt should know, Superman is, of course, powerless when it comes to fighting the occult. Nowhere in this collection is that more apparent than in the classic 1959 tale “The Truth Mirror” (originally published in Action Comics #269), in which Superman’s gal pal Lois uses an enchanted mirror to learn his secret identity. There’s also a spooky story called “The Ghost that Haunted Clark Kent” where Superman takes on a headless phantom at the Tower of London.

It’s not just Superman tales in this collection though; there are some great stories starring Jimmy Olsen and Lois Lane. There’s also a fantastic Supergirl Story entitled “The Black Magic of Supergirl” in which the heroine unwisely enlists some help from the occult to deal with some super-problems. The downside to that particular arrangement is that a curse causes Supergirl to sprout some rather prominent devil horns – something that many adolescent and adult male readers would understandably find rather sexy…but when I read it as a third-grader, I thought it was just really, really freaky.

The Best of DC: Superman vs. The Supernatural has all of the bases covered when it comes to great comic reading. Terrific art from unnamed Golden Age illustrators as well as Superman master-penciler Curt Swan along with a cavalcade of offbeat villains including the demons from Pandora’s Box and even the ghost of Jack the Ripper himself make for a thrilling tome of terrific tales. And because these digests haven’t gained much in the way of monetary or collectible value over the years, if you can still manage find a copy for yourself, it’ll be well worth the search. 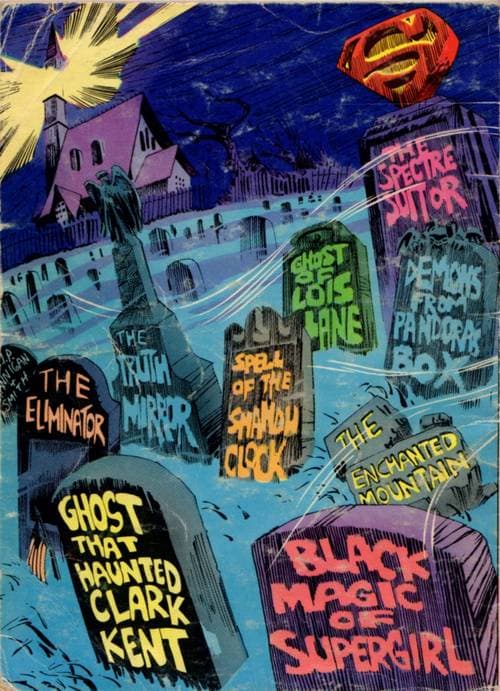 Back cover of “Superman vs. the Supernatural.”

This entry was posted in comics and tagged DC Comics, Mike Bessler, Superman. Bookmark the permalink.