It’s something that’s so easily overlooked; that small box labeled “religious comics” that’s often found tucked away under a table or in the darkest corner of a comic shop or second hand bookstore.  Maybe I’m a sucker for some of the more bizarre facets of popular culture, but anytime I see a box of churchy comics, I can’t resist rummaging through them.  Religion and comics often come together to produce a unique brand of zaniness, as is evident from the insanity-ridden tracts that Jack Chick has been churning out for decades. 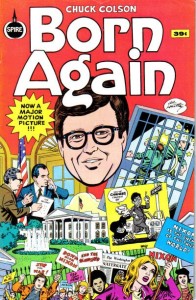 But the evangelical fire and brimstone of Chick’s work is just one facet of the peculiar genre of religious comics.  The old Treasure Chest comics, which saw something of a heyday back in the 1950s and 1960s, attempted to inform as well as inspire.  The “Buddy Jesus” comics that portray the purported Son of Man hanging out with a crew of talking animals, playing four square and rapping about creationism are always good for a chuckle, as well.  Some comics seek to effectively recreate the memorable scenes and stories of the Bible or they present modern tales of religious folks and their struggles.  Then there are the quasi-biographical, “here’s how this poor schmuck found salvation” stories.  Those comics are always entertaining in their own morbidly special way.  A prime example of the latter is Chuck Colson –Born Again, a comic book adaptation of the Watergate con’s 1975 autobiography of the same name.

Published by Spire Christian Comics in 1978, Born Again is the sugar-coated, “feel good” story of Chuck Colson’s suffering and redemption.  It’s a relatively typical tale in some respects, as Colson professes that he was converted to Evangelical Christianity through the help of his friend Thomas Phillips who had himself been “saved” some time earlier.  Phillips provides Colson with a copy of the C.S. Lewis book Mere Christianity and Colson subsequently immerses himself in the text, learning all kinds of Jesusy insight. (Incidentally, despite the fact that he apparently needed “saving,” Colson effectively maintains that he was basically law-abiding – and apparently naïve and blissfully oblivious of the wrongdoing and unethical behavior swirling around him – throughout all of his work with the Nixon administration and CREEP.) While serving time in a Federal prison for convictions related to the Watergate scandal, Colson shares his enlightenment with other inmates and he ultimately decides to start a ministry and devote his life to spreading the word far and wide.

Well…I guess some of that story is true.

The fact of the matter is that Chuck Colson – Born Again is nothing short of a grand and glorious collection of obfuscation and half-truths.  Colson’s yarn portrays the man himself as an pious martyr acting in service of a naively innocent Richard Nixon.  In one of the more laughable parts of the story, it’s inferred that John Ehrlichman learned of the Watergate break-in while watching the evening news.  Indeed, the entire question of wrongdoing and guilt is effectively marginalized through the omnipresent argument that Richard Nixon’s coterie of henchmen acted under the Nietzschean principal that “what is done out of love always takes place beyond good and evil.”  With respect to this particular version of the Watgergate story, it’s basically unclear as to whether the “love” that spurred Nixon and co. to action was an unfettered and dogmatic love of country or a just good old-fashioned lust for power, influence and control. 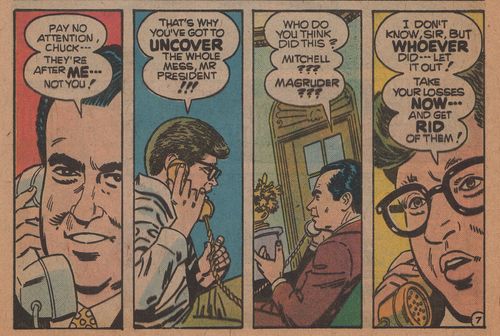 Chuck Colson – Born Again has kitschy appeal on many levels: It’s a nostalgic yet warped snapshot of history along with some fundamentalist farce and a good bit of out and out weirdness.  But in the most basic of terms, this comic book is simply a case of art imitating life…and it’s a pale, sad and half-assed imitation at that.  Enjoy it for what it is: a dose of self-righteous and egotistical spin, courtesy of a very guilty conscience.

This entry was posted in comics and tagged gammacloud, greeklish, weird comics. Bookmark the permalink.